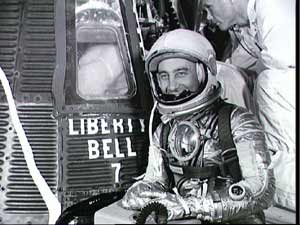 Image above: Astronaut Virgil I. (Gus) Grissom, suited up and ready to climb into Liberty Bell 7 spacecraft, poses for a picture. Backup pilot John Glenn is in the right corner of the view behind Grissom. The Mercury-Redstone 4 (MR-4) mission was scrubbed a few hours later due to unfavorable weather over the launch pad. Image Credit: NASA

Mission Objective:
Mercury-Redstone 4 was the fourth mission in the Mercury-Redstone series of flight tests and the second U.S. manned suborbital spaceflight. It was the next step in the progressive research, development and training program leading to the study of man's capabilities in a space environment during manned orbital flight.

The main objective was to corroborate the man-in-space concept. The main configuration differences between the MR-3 spacecraft was the addition of a large viewing window and an explosively actuated side hatch.

The addition of the large viewing window was a result of a change requested by Mercury astronauts. This window allowed the astronauts to have a greater viewing area than the original side port windows. The field of view was 30 degrees in the horizontal plane and 33 degrees in the vertical. The window is composed of an outer panel of 0.35-inch thick Vycor glass and a 3-layer inner panel.

The explosively actuated side hatch was used for the first time on the MR-4 flight. The mechanically operated side hatch on the MR-3 spacecraft was in the same location and of the same size but was considerably heavier (69 pounds rather than 23 pounds). The explosively actuated hatch utilizes an explosive charge to fracture the attaching bolts and thus separate the hatch from the spacecraft. Seventy 1/4-inch titanium bolts secure the hatch to the doorsill. A 0.06-inch diameter hole is drilled in each bolt to provide a weak point. A mild detonating fuse (MDF) is installed in a channel between an inner and outer seal around the periphery of the hatch. When the MDF is ignited, the resulting gas pressure between the inner and outer seal causes the bolts to fail in tension. The MDF is ignited by a manually operated igniter that requires an actuation force of around 5 pounds, after the removal of a safety pin. The igniter can be operated externally by an attached lanyard, in which case a force of at least 40 pounds is required in order to shear the safety pin.

Launch:
July 21, 1961, 7:20 a.m. EST -- The launch was originally scheduled for July 18, 1961 but was rescheduled to July 19, 1961 because of unfavorable weather conditions. The launch attempt on July 19, 1961 was canceled at T-10 minutes as a result of continued unfavorable weather. The launch was then rescheduled for July 21, 1961. The first half of the split launch countdown was begun at 6:00am EST on July 20, 1961 at T-640 minutes. Spacecraft preparation proceeded normally thru the 12-hour planned hold period for hydrogen peroxide and pyrotechnic servicing. Evaluation of the weather at this time proved favorable and a go was given to pickup the second half of the countdown at 2:30am EST on July 20, 1961. At T-180 minutes, prior to liquid oxygen loading, a planned 1-hour hold was called for another weather evaluation. The evaluation was favorable and the count proceeded at 3:00am EST. At T-45 minutes a 30 minute hold was called to install a misaligned hatch bolt. At T-30 minutes, a 9-minute hold was called to turn off the pad searchlights which interfered with launch telemetry during launch. At T-15 minutes, a 41-minute hold was called to await better cloud conditions. The count then proceeded from T-15 until liftoff. Gus Grissom was in the spacecraft 3 hours and 22 minutes prior to launch. The spacecraft was delivered to Hanger S at Cape Canaveral, Fl on March 7, 1961. Upon delivery, the instrumentation and selected items of the communication system were removed from the spacecraft for bench testing. After reinstallation of the components, the systems test proceeded as scheduled. Those tests required a total of 33 days during which the electrical, sequential, instrumentation, communication, environmental, reaction-control, and stabilization and control systems were individually tested. After system tests, the landing impact bag was installed and then a simulated flight was run on the spacecraft. Then the parachutes and pyrotechnics were installed and the spacecraft was weighed, balanced and then delivered to the launch complex. Twenty-one days were spent on the launch pad.

Mission Highlights:
The MR-4 flight plan was very much the same as that for MR-3. The range was 262.5 nautical miles, the maximum altitude was 102.8 nautical miles, and the period of weightlessness lasted for approximately 5 minutes.

At T-35 seconds, the spacecraft umbilical was pulled and the periscope was retracted. During the boosted phase of flight, the flight-path angle was controlled by the launch-vehicle control system. Launch-vehicle cutoff occurred at T+2 minutes 23 seconds, at which time the escape tower was released by firing the escape and tower jettison rockets. Ten seconds later, the spacecraft-to-launch-vehicle adapter clamp ring was separated, and the posigrade rockets fired to separate the spacecraft from the launch vehicle. The periscope was extended; the automatic stabilization and control system provided 5 seconds of rate damping, followed by spacecraft turnaround. It then oriented the spacecraft to orbit attitude of -34 degrees.

Flight successful but the spacecraft was lost during the post landing recovery period as a result of premature actuation of the explosively actuated side egress hatch. The capsule sank in 15,000 feet of water shortly after splashdown. The astronaut egressed from the spacecraft immediately after hatch actuation and was retrieved after being in the water for about 3 to 4 minutes.