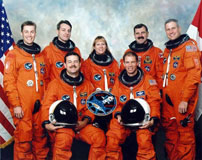 Neurolab's 26 experiments targeted one of the most complex and least understood parts of the human body -- the nervous system. The primary goals were to conduct basic research in neurosciences and expand understanding of how the nervous system develops and functions in space. Test subjects were crew members and rats, mice, crickets, snails and two kinds of fish. This was a cooperative effort of NASA, several domestic partners and the space agencies of Canada (CSA), France (CNES) and Germany (DARA), as well as the European Space Agency (ESA) and the National Space Development Agency of Japan (NASDA). Most experiments were conducted in the pressurized Spacelab long module located in Columbia's payload bay. This was the 16th and last scheduled flight of the ESA-developed Spacelab module although the Spacelab pallets will continue to be used on the International Space Station. Read more about the Neurolab Spacelab Mission findings in this book.

Research was conducted as planned, with the exception of the Mammalian Development Team, which had to reprioritize science activities because of the unexpected high mortality rate of neonatal rats on board.

Working with engineers on the ground a week into the flight, the on-orbit crew used aluminum tape to bypass a suspect valve in the Regenerative Carbon Dioxide Removal System that had threatened to cut short the mission.

Mission Management Team considered, but decided against, extending the mission one day because the science community indicated an extended flight was not necessary and weather conditions were expected to deteriorate after planned landing on Sunday, May 3.