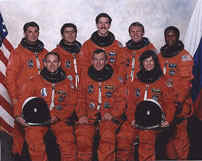 Endeavour returned to space after completing its first Orbiter Maintenance Down Period, becoming first orbiter other than Atlantis to dock with Mir. On May 22, 1997, mission managers announced Endeavour would fly STS-89 instead of Discovery. Launch originally targeted for Jan. 15, 1998, changed first to no earlier than Jan. 20 and then Jan. 22, per request from the Russian space program to allow completion of activities on Mir. First launch overseen by one of two new rotational launch directors, Dave King, following retirement of veteran Launch Director Jim Harrington.

Docking of Endeavour to Mir occurred at 3:14 p.m., Jan. 24, at an altitude of 214 nautical miles. Hatches opened at 5:25 p.m. the same day. Transfer of Andy Thomas to Mir and return of David Wolf to the U.S. orbiter occurred at 6:35 p.m., Jan. 25. Initially, Thomas thought his Sokol pressure suit did not fit, and the crew exchange was allowed to proceed only after Wolf's suit was adjusted to fit Thomas. Once on Mir, Thomas was able to make adequate adjustments to his own suit (which would be worn should the crew need to return to Earth in the Soyuz capsule) and this remained on Mir with him. Wolf spent a total of 119 days aboard Mir, and after landing his total on-orbit time was 128 days.

On Jan. 31, a new crew docked with Mir to begin a three-week handover. Thomas and his Mir 24 crewmates, Commander Anatoly Solvyev and Flight Engineer Pavel Vinogradov, greeted Mir 25 Commander Talgat Musabayev, Flight Engineer Nikolai Budarin and French researcher Leopold Eyharts following a soft docking on Jan. 31, just hours before the STS-89 crew touched down in Florida. Eyharts was to return to Earth Feb. 19 with the two Mir 24 cosmonauts, leaving Thomas, Musabayev and Budarin on Mir. Thomas, the last U.S. astronaut assigned to complete a lengthy stay on Mir, will return to Earth after a four-month stay as Phase I activities draw to a close.