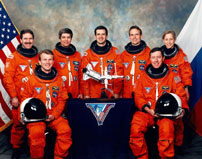 The first shuttle flight of 1997 which was highlighted by the return of U.S. astronaut John Blaha to Earth after 118-day stay aboard the Russian Space Station Mir and the largest transfer to date of logistics between the two spacecraft. Atlantis also returned carrying the first plants to complete a life cycle in space -- a crop of wheat grown from seed to seed. This fifth of nine planned dockings continued Phase 1B of the NASA/Russian Space Agency cooperative effort, with Linenger becoming the third U.S. astronaut in succession to live on Mir. Same payload configuration flown on previous docking flight -- featuring SPACEHAB Double module -- flown again.

Blaha joined Mir 22 crew of Commander Valeri Korzun and Flight Engineer Aleksandr Kaleri on Sept. 19, 1996, when he arrived there with the crew of STS-79. Linenger was to work with the Mir 22 crew until the arrival in February of the Mir 23 crew of Commander Vasili Tsibliev, Flight Engineer Aleksandr Lazutkin and German researcher Reinhold Ewald. Ewald was to return to Earth with the Mir 22 cosmonauts after a brief stay on the station. Astronaut Michael Foale will replace Linenger on Mir when the STS-84 mission arrives in May 1997.

Crew also tested on the shuttle the Treadmill Vibration Isolation and Stabilization System (TVIS), designed for use in the Russian Service Module of the International Space Station. Another activity related to International Space Station involved firing the orbiter's small vernier jet thrusters during mated operations to gather engineering data. Undocking occurred at 9:15 p.m. EST, Jan. 19, followed by flyaround of Mir.