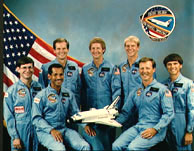 The launch set for December 18, 1985 was delayed one day when additional time needed to close out orbiter aft compartment. Another launch attempt on December 19 scrubbed at T- 14 seconds due to indication that the right solid rocket booster hydraulic power unit was exceeding the RPM redline speed limits. (This was later determined to be a false reading.) After an 18-day delay, a launch attempt January 6, 1986 halted at T-31 seconds due to the accidental draining of approximately 4,000 pounds of liquid oxygen from the external tank. The launch attempt January 7 scrubbed at T-9 minutes due to bad weather at both transoceanic abort landing sites (Moron, Spain and Dakar, Senegal). After a two-day delay, the launch set for January 9 was delayed due to the launch pad liquid oxygen sensor breaking off and lodging in the number two main engine prevalve. The launch set for January 10 was delayed two days due to heavy rains. The launch countdown on January 12 proceeded with no delays.

The planned landing at KSC, originally scheduled for January 17, moved to January 16 to save orbiter turnaround time. Landing attempts on January 16 and 17 were abandoned due to unacceptable weather at KSC. The landing set for January 18 at KSC but persisting bad weather forced a one revolution extension of mission and landing at Edwards.