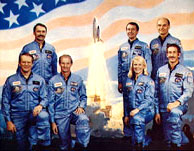 The launch set for March 19 was rescheduled to March 28 due to remanifesting of payloads from canceled mission 51-E. The mission was delayed further due to damage to the orbiter's payload bay door when the facility access platform dropped. The launch on April 12 delayed 55 minutes when a ship entered the restricted solid rocket booster recovery area.

Extensive brake damage and a blown tire during the landing prompted the landing of future flights at Edwards Air Force Base until implementation of the nose wheel steering.