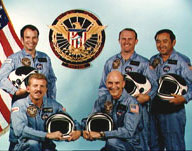 The launch scheduled for January 23 was scrubbed due to freezing weather conditions. (Orbiter Challenger was scheduled for Mission 51-C but thermal tile problems forced the substitution of Discovery.)

The countdown phase was completed satisfactorily, however, two minor orbiter problems were noted during that period. The first occurred during the T-3 hour hold and involved a force fight in the right inboard elevon actuator between channel 4 and channels 1, 2, and 3. The condition corrected itself within 22 seconds after the Auxiliary Power Unit (APU) start up at T-5 minutes. A similar problem with the same channels in the same actuator occurred on STS 41-D (the first flight of this vehicle).

This was the first mission dedicated to the Department of Defense. The U.S. Air Force Inertial Upper Stage (IUS) booster was deployed and met the mission objectives.