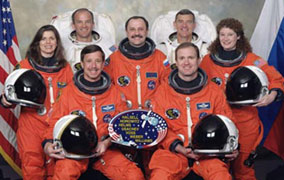 After three launch delays in April caused by high winds at the launch site and overseas emergency landing strips, Atlantis blasted off from KSC's Launch Pad 39A on time. A crew of six American astronauts and one Russian cosmonaut were on their way to pay a "home improvement" house call on the fledgling International Space Station (ISS).

On their 10-day mission, the astronauts completed one space walk (EVA), equipped the ISS with new or replacement gear and transferred more than a ton of supplies into the space station for use by future residents of the ISS.

The EVA marked the fifth space walk for construction of the ISS, the 49th conducted from a space shuttle, and the 85th overall conducted by U.S. astronauts. During the six-hour, 44-minute EVA, Mission Specialists James Voss and Jeffrey Williams secured a United States-built crane installed on the station last year; installed the final parts of a Russian-built crane, Strela, on the Pressurized Mating Adapter-1 that connects the Unity node to the Zarya control module; replaced a faulty antenna for one of the station's communications systems; and installed several handrails and a camera cable on the ISS exterior. Mission Specialist Mary Ellen Weber operated the Shuttle's robotic arm, which she used to maneuver Voss during much of the space walk.

Work inside the space station followed. Before entering the space station, the crew opened various hatches into and within the different modules, in this order: PMA-2, Unity node, PMA-1, Zarya, and instrumentation cargo compartment on Zarya. Over the course of three days, the crew installed four batteries and associated electronics; 10 new smoke detectors in the Zarya module; four new cooling fans; additional cables for the Zarya computer to enhance capabilities; a new communications memory unit; and a new power distribution box for the U.S.-built communications system.

Next came the transfer of supplies – more than 3,300 pounds of gear ranging from clothes, tools, can openers, sewing kits and trash bags to a treadmill, an exercise bicycle ergometer and IMAX film camera. The crew also filled four 12-gallon water containers for use by future resident astronauts aboard the ISS.

During the mission, Commander Halsell and Pilot Horowitz also fired Atlantis' jets three times to boost the ISS about 27 miles into a slightly higher orbit of 225 miles. When stowage was complete, the crew reversed the procedure to close the hatches in the space sttation, with the final hatch shut at 4:40 a.m. EDT, May 26.

Undocking with the space station occurred at 7:02 p.m. EDT, May 26. Pilot Horowitz backed Atlantis away and then flew a half-circle around the station before firing Atlantis' jets in a final separation burn at 7:41 p.m. EDT.