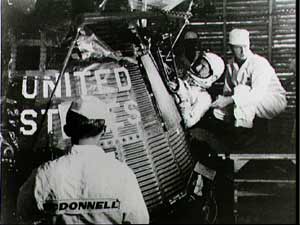 Image above: Astronaut M. Scott Carpenter is inserted inside his Aurora 7 spacecraft, before the launch of the Mercury-Atlas 7 mission. Image Credit: NASA

Launch:
May 24, 1962, 7:45:16 EST. The launch countdown proceeded almost perfectly, with only a last-minute hold of 45 minutes occurring at the T-11 minutes mark in anticipation of better camera coverage and to allow aircraft to check the atmospheric refraction index in the vicinity of Cape Canaveral. The launch vehicle used to accelerate Carpenter and the Aurora 7 spacecraft was an Atlas D. The differences between the Atlas 107-D launch vehicle and the Atlas 109-D used for MA-6 involved retention of the insulation bulkhead and reduction of the staging time from 131.3 to 130.1 seconds after liftoff.

The performance of the launch vehicle was exceptionally good with the countdown, launch and insertion conforming very closely to planned conditions. At sustainer engine cut off (SECO) at T+5 minutes, 10 seconds, all spacecraft and launch vehicle systems were go and only one anomaly occurred during launch. The abort sensing and implementation system (ASIS) Hydraulic switch no. 2 for the sustainer engine actuated to the abort position at 4:25 minutes after liftoff. Pressure transducer H52P for the sustainer hydraulic accumulator was apparently faulty and showed a gradual decrease in pressure from 2,940 psia to 0 between 190 and 312 seconds after liftoff. Another transducer in the sustainer control circuit indicated that pressure had remained at proper levels so the switch did not actuate until the normal time after SECO.

Carpenter was picked up by HSS-2 helicopters dispatched from the aircraft carrier USS Intrepid (CVS-11) while the destroyer USS Farragut (DLG-6) watched the Aurora 7 capsule until it could be retrieved with special equipment aboard the USS John R. Pierce about 6 hours later. A considerable amount of sea water was found in the spacecraft which was believed to have entered through the small pressure bulkhead when Carpenter passed through the recovery compartment into the life raft. The spacecraft was delivered by destroyer to Roosevelt Roads, Puerto Rico with the subsequent return to Cape Canaveral by airplane.

Mission Highlights:
Total time weightless was 4 hours, 39 minutes, 32 seconds. The performance of the Mercury spacecraft and Atlas launch vehicle was excellent in nearly every respect. All primary mission objectives were achieved. The single mission critical malfunction which occurred involved a failure in the spacecraft pitch horizon scanner, a component of the automatic control system. This anomaly was adequately compensated for by the pilot in subsequent in-flight operations so that the success of the mission was not compromised. A modification of the spacecraft control-system thrust units were effective. Cabin and pressure-suit temperatures were high but not intolerable. Some uncertainties in the data telemetered from the bioinstrumentation prevailed at times during the flight; however, associated information was available which indicated continued well-being of the astronaut. Equipment was included in the spacecraft which provided valuable scientific information; notably that regarding liquid behavior in a weightless state, identification of the airglow layer observed by Astronaut Glenn, and photography of terrestrial features and meteorological phenomena. An experiment which was to provide atmospheric drag and color visibility data in space through deployment of an inflatable sphere was partially successful. The flight further qualified the Mercury spacecraft systems for manned orbital operations and provided evidence for progressing into missions of extended duration and consequently more demanding systems requirements.