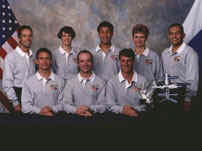 Sixth Shuttle-Mir docking highlighted by transfer of fourth successive U.S. crew member to the Russian Space Station. U.S. astronaut Mike Foale exchanged places with Jerry Linenger, who arrived at Mir Jan. 15 with the crew of shuttle mission STS-81. Linenger spent 123 days on Mir and just over 132 days in space from launch to landing, placing him second behind U.S. astronaut Shannon Lucid for most time spent on-orbit by an American. Another milestone reached during his stay was one-year anniversary of continuous U.S. presence in space that began with Lucid's arrival at Mir March 22, 1996.

Other significant events during Linenger's stay included first U.S.-Russian space walk. On April 29, Linenger participated in a five-hour extravehicular activity (EVA) with Mir 23 Commander Vasily Tsibliev to attach a monitor to the outside of the station. The Optical Properties Monitor (OPM) was to remain on Mir for nine months to allow study of the effect of the space environment on optical properties, such as mirrors used in telescopes.

On Feb. 23, a fire broke out on the 11-year old station. It caused minimal damage but required station's inhabitants to wear protective masks for about 36 hours until cabin air was cleaned. Besides Linenger, crew members aboard Mir at the time included two Mir 22 cosmonauts, a German cosmonaut and two Mir 23 cosmonauts.

Transfer of items to and from Mir proceeded smoothly and was completed ahead of schedule. One of first items transferred to the station was an Elektron oxygen-generating unit. Altogether about 249 items were moved between the two spacecraft, and about 1,000 pounds of water moved to Mir, for a total of about 7,500 pounds of water, experiment samples, supplies and hardware.

Research program planned for Foale featured 35 investigations total (33 on Mir, two on STS-84, and another preflight/postflight) in six disciplines: advanced technology, Earth observations and remote sensing, fundamental biology, human life sciences, space station risk mitigation, and microgravity sciences. Twenty-eight of these were conducted during previous missions and were to be continued, repeated or completed during Foale's stay. Seven new experiments were planned in biological and crystal growth studies and materials processing.

Undocking occurred at 9:04 p.m. EDT, May 21. Unlike prior dockings, no flyaround of the station by the orbiter was conducted, but the orbiter was stopped three times while backing away to collect data from a European sensor device designed to assist future rendezvous of a proposed European Space Agency resupply vehicle with the International Space Station.

Other activities conducted during the mission included investigations using the Biorack facility, located in the SPACEHAB Double Module in Atlantis' payload bay, a photo survey of Mir during docked operations, environmental air samplings and radiation monitoring.

Orbiter performance was nominal from launch to landing.