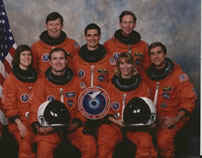 Launch originally set for April 3 delayed 24 hours on April 1 due to a requirement to add additional thermal insulation to a water coolant line in the orbiter's payload bay. Managers determined that the line, which cools various electronics on the orbiter, was not properly insulated and could possibly freeze on-orbit. Liftoff delayed 20 minutes, 32 seconds due to an orbiter access hatch seal which had to be replaced.

First flight of the Microgravity Science Laboratory-1 (MSL-1) cut short due to concerns about one of three fuel cells, marking only the third time in shuttle program history a mission ended early. (STS-2, 1981 and STS-44, 1991 were other two times). Fuel cell No. 2 had shown some erratic readings during prelaunch startup, but was cleared to fly after additional checkout and test. Shortly after on-orbit operations began, the fuel cell no. 2 substack No. 3 differential voltage began trending upward. There are three fuel cells on each orbiter, each containing three substacks made up of two banks of 16 cells. In one substack of fuel cell No. 2, the difference in output voltage between the two banks of cells was increasing. The fuel cells use a reaction of liquid hydrogen and liquid oxygen to generate electricity and produce drinking water. Although one fuel cell produces enough electricity to conduct on-orbit and landing operations, shuttle flight rules require all three to be functioning well to ensure crew safety and provide sufficient backup capability during reentry and landing.

When a purge failed to halt the upward trend, the fuel cell was shut down. Additional purges and other measures failed to correct the anomaly, and around 10 a.m., April 6, the Mission Management Team ordered the mission to end early. Fuel cell No. 2 was shut down for good later that afternoon and safed.

Crew was able to conduct some science in the MSL-1 Spacelab module despite the early return. Work was performed in the German electromagnetic levitation furnace facility (TEMPUS) on an experiment called Thermophysical Properties of Undercooled Metallic Melts. This experiment studies the amount of undercooling that can be achieved before solidification occurs. Another experiment performed was the Liquid-Phase Sintering II experiment in the Large Isothermal Furnace. This investigation uses heat and pressure to test theories about how the liquefied component bonds with the solid particles of a mixture without reaching the melting point of the new alloy combination.

Also conducted were two fire-related experiments. The Laminar Soot Processes experiment allowed scientists to observe for the first time the concentration and structure of soot from a fire burning in microgravity. The Structure of Flame Balls at Low Lewis-number experiment completed two runs. This experiment is designed to determine under what conditions a stable flame ball can exist, and if heat loss is responsible in some way for the stablilization of the flame ball during burning.

A decision to refly the mission in its entirety was made by the Mission Management Team in the days following Columbia's return. The reflight was first designated STS-83R and then renamed STS-94.