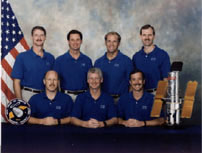 STS-82 demonstrated anew the capability of the space shuttle to service orbiting spacecraft as well as the benefits of human spaceflight. A six-member crew completed servicing and upgrading of the Hubble Space Telescope (HST) during four planned extravehicular activities (EVAs) and then performed a fifth unscheduled space walk to repair insulation on the telescope.

HST deployed in April 1990 during STS-31. It was designed to undergo periodic servicing and upgrading over its 15-year lifespan, with first servicing performed during STS-61 in December 1993. Hawley, who originally deployed the telescope, operated the orbiter Remote Manipulator System arm on STS-82 to retrieve HST for a second servicing at 3:34 a.m. EST, Feb. 13, and positioned it in the payload bay less than half an hour later.

Relying on more than 150 tools and crew aids, Lee and Smith performed EVAs 1, 3 and 5, and Harbaugh and Tanner did EVAs 2 and 4. EVA 1 began at 11:34 p.m. EST, Feb. 13, and lasted six hours, 42 minutes. One of Hubble's solar arrays was unexpectedly disturbed by a gust of air from Discovery's airlock when it was depressurized, but was not damaged. Lee and Smith removed two scientific instruments from Hubble, the Goddard High Resolution Spectrograph (GHRS) and Faint Object Spectrograph (FOS), and replaced them with the Space Telescope Imaging Spectrograph (STIS) and Near Infrared Camera and Multi-Object Spectrometer (NICMOS), respectively. STIS expected to shed further light on supermassive black holes. NICMOS features more capable infrared detectors and will give astronomers their first clear view of the universe at near infrared wavelengths between 0.8 and 2.5 micrometers.

EVA 2 began at 10:25 p.m., Feb. 14, and lasted seven hours, 27 minutes. Harbaugh and Tanner replaced a degraded Fine Guidance Sensor and a failed Engineering and Science Tape Recorder with new spares. Also installed a new unit called the Optical Control Electronics Enhancement Kit, which will further increase the capability of the Fine Guidance Sensor. During this EVA astronauts noted cracking and wear on thermal insulation on side of telescope facing the sun and in the direction of travel.

EVA 3 began at 9:53 p.m., Feb. 15, and lasted seven hours, 11 minutes. Lee and Smith removed and replaced a Data Interface Unit on Hubble, as well as an old reel-to-reel- style Engineering and Science Tape Recorder with a new digital Solid State Recorder (SSR) that will allow simultaneous recording and playback of data. Also changed out one of four Reaction Wheel Assembly units that use spin momentum to move the telescope toward a target and maintain it in a stable position. After this EVA, mission managers decided to add EVA 5 to repair the thermal insulation on HST.

EVA 4 began at 10:45 p.m., Feb. 16, and lasted six hours, 34 minutes. Harbaugh and Tanner replaced a Solar Array Drive Electronics package which controls the positioning of Hubble's solar arrays. Also replaced were covers over Hubble's magnetometers and thermal blankets of multi-layer material over two areas of degraded insulation around the light shield portion of the telescope just below the top of the observatory. Meanwhile, inside Discovery, Horowitz and Lee worked on the middeck to fabricate new insulation blankets for HST.

Discovery's maneuvering jets fired several times during the mission to reboost the telescope's orbit by eight nautical miles. Hubble redeployed on Feb. 19 at 1:41 a.m. and is now operating at the highest altitude it has ever flown, a 335- by 321-nautical-mile orbit. Initial checkout of new instruments and equipment during mission showed all were performing nominally. Calibration of two new science instruments was to take place over a period of several weeks with first images and data anticipated in about 8 to 10 weeks. Two more servicing are missions planned for 1999 and 2002.

Performance of Discovery was nominal throughout the mission.