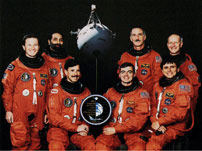 Liftoff occurred ontime following smooth countdown. Six seconds after liftoff, crew reported left main engine chamber pressure tape meter was reading only 40 percent thrust instead of 104 percent prior to throttle-down. Mission controllers in Houston reported telemetry showed all three engines were performing nominally and there was no effect                                   on the ascent phase.

TSS flew previously on Mission STS-46 in June 1992, but experiment operations curtailed due to jammed tether. TSS concept designed to study electrodynamics of a tether system in electrically charged portion of Earth's atmosphere called the ionosphere. Satellite provided by Italy and tether/deployer assembly U.S.-built. Twelve investigations -- six NASA, five Italian Space Agency (ASI) and one U.S. Air Force -- planned. Deployment of TSS-1R on STS-75 delayed one day to allow troubleshooting of onboard TSS computers by flight crew. Excellent scientific data was being gathered when tether snapped on flight day three as satellite was just short of full deployment of about 12.8 miles (20.6 kilometers). Satellite immediately began speeding away from orbiter as a result of orbital forces and the crew was never in any danger. Reason for tether break not immediately clear and investigative board convened on ground to determine cause. Crew retracted deployer and remaining tether following day.

Meanwhile, scientists did gather useful data from curtailed deployment. Currents measured during deployment phase were at least three times greater than predicted by analytical modeling, and amount of power generated was directly proportional to the current. Tether voltages of as high as 3,500 volts were developed across the tether, and current levels of about 480 milliamps were achieved. Researchers also able to study how gas from satellite's thrusters interacts with ionosphere. Also collected first-time measurements of ionized shock wave around the TSS satellite, a phenomenon that cannot be studied in the laboratory and is difficult to mathematically model. Another first was collection of data on the plasma wakes created by moving body through electrically-charged ionosphere. Some experiments conducted using free- flying satellite and attached tether before it re-entered Earth's atmosphere and broke up.

USMP-3, flying on shuttle for third time, included U.S. and international experiments, all of which had flown at least once before: Advanced Automated Directional Solidification Furnace (AADSF), a crystal growth facility; Critical Fluid Light Scattering Experiment (Zeno), to study element Xenon at its critical point; Isothermal Dendritic Growth Experiment (IDGE), to study formation of dendrites, tree-shaped crystals that in metals manufacturing dictate final properties of material; and Materials for the Study of Interesting Phenomena of Solidification on Earth and in Orbit (MEPHISTO) to study how metals solidify in microgravity using a furnace.

IDGE experiment yielded twice expected amount of data. Best images ever transmitted of dendrites were gathered. This also was first shuttle experiment controlled by principal investigator at a remote non-NASA site, foreshadowing types of research which will be conducted on International Space Station, where researchers could be based at universities.

Zeno allowed investigators to observe with unprecedented clarity behavior of xenon at critical point, when it exists as both gas and liquid. Such phase change phenomena common to many different materials and knowledge gained from Zeno could apply to such fields as liquid crystal growth and superconductor research.