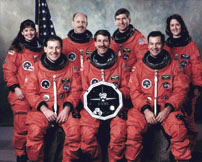 A successful launch after six scrubs tied STS-73 with STS 61-C (Jan. 12-18, 1986) for most number of launch scrubs. 1.) Liftoff originally set for Sept. 25 was scrubbed shortly after tanking began, when hydrogen leak was detected in main engine no. 1 main fuel valve. Valve replaced at pad. 2.) Launch re-set for Oct. 5, but weather effects due to Hurricane Opal led to L-1 day decision to postpone launch one day to Oct. 6. 3.) Oct. 6 launch attempt scrubbed prior to external tank loading when it was determined that hydraulic fluid had been inadvertently drained from hydraulic system 1 following the main engine no. 1 fuel valve replacement. Compressibility test demonstrated system was satisfactory for launch, and liftoff re-set to occur Oct. 7. 4.) Launch attempt Oct. 7 scrubbed at T-20 seconds when master events controller 1 (MEC 1) failed to operate properly and mission managers determined it needed to be replaced. Launch re-set for Oct. 14 was then 5.) re-scheduled to Oct. 15 to allow additional time to inspect the main engine oxidizer ducts as a result of finding a crack in a test engine oxidizer duct at Stennis. Also during this delay, a faulty general purpose computer 1 (GPC 1) had to be replaced. 6.) Launch attempt Oct. 15 postponed at T-5 minutes due to low clouds and rain. Launch tentatively reset to Oct. 19 pending successful Atlas launch Oct. 18; however, Atlas launch was delayed and STS-73 launch moved to Oct. 20. Countdown to liftoff Oct. 20 was delayed three minutes due to a range computer glitch.

STS-73 marked second flight of U.S. Microgravity Laboratory (USML) and built on foundation of its predecessor, which flew on Columbia during Mission STS-50 in 1992. Research during USML-2 concentrated within same overall areas of USML-1, with many experiments flying for second time. Crew divided into two teams to work around the clock in 23-foot (seven-meter) long Spacelab module located in Columbia's payload bay.

Experiments went smoothly. In some cases, results re-confirmed existing theories, while in other cases results were new and unique. Highlights included unprecedented results from the Surface Tension Driven Convection Experiment, which flew for second time and studied in great detail basic fluid mechanics and heat transfer of thermocapillary flows, motions created within fluids by non-uniform heating of their free surfaces. Oscillations observed on USML-2 samples had never been observed on Earth, and researchers controlling experiment from the ground were able to pinpoint when fluid flows transitioned from stable to unstable. Research has direct applications on Earth, in that unwanted fluid flows during melting and resolidifying can create defects in high-tech crystals, metals, alloys and ceramics.

Flying for first time was Fiber Supported Droplet Combustion experiment. More than 25 droplets of variety of fuels were ignited, confirming theories about how fuels burn in microgravity. Results revealed larger droplet extension diameter -- size of drop as it burns out -- than are capable of being studied on Earth, with burning times 10 times longer. Data confirmed scientific predictions about burn rate and amount of fuel left over after fire goes out. This will allow investigators to refine theories and possibly develop new ones about byproducts such as soot and smog.

Record number of Protein Crystal Growth (PCG) samples -- around 1,500 -- were flown on USML-2 and initial results indicated many had produced crystals which will be further studied after landing. Other crystal growth experiments were equally successful. In the Crystal Growth Furnace, which flew for first time on USML-1, a crystal was grown for first time as a liquid bridge to minimize contact with container wall, thus decreasing number of defects in crystal. Eight semiconductor crystals were grown, also a very thin crystal and two crystals which could lead to products such as computer chips that are faster and use less power than traditional computer chips.

Crew took time out from Spacelab work to tape ceremonial first pitch for Game Five of baseball World Series, marking first time the thrower was not actually in the ballpark for the pitch.

Orbiter Columbia performed without serious problems, with only notable glitch being two vernier thruster jets failing several times throughout mission; function was restored by cycling them on and off. Also, equipment failure at ground terminal for NASA's Tracking and Data Relay Communications (TDRS) satellites necessitated two extended communications outages between Columbia and Earth in order to perform repair.