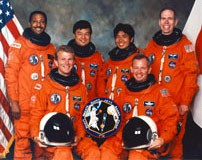 Countdown to first shuttle launch of year proceeded smoothly except for 23-minute delay due to communication glitches between various sites on ground, and to avoid potential collision with space debris.

First shuttle flight of 1996 highlighted by retrieval of a Japanese satellite, deployment and retrieval of a NASA science payload, and two spacewalks.