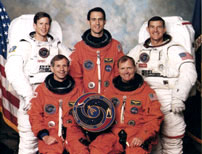 Launch originally set for Aug. 5 postponed indefinitely to allow further review of solid rocket motor nozzle joint hardware from two previous missions, STS-70 and STS-71. Inspection team formed to assess significance of gas path in nozzle internal joint number 3, extending from insulation in the motor chamber to, but not past, primary O-ring seal. Team concluded nozzle joint design was sound and that gas paths were being created when insulation material, known as RTV or Room Temperature Vulcanizing, was applied. Small air pockets were forming in thermal insulation that could later become pathways for hot gas during motor operation. Attention then focused on developing procedures to allow Non-Destructive Evaluation (NDE) inspection of insulation at the pad and new launch date of Aug. 31 set. Nozzle joint insulation of boosters assigned to Missions STS-73 and STS-74 also repaired at KSC, but work did not impact schedule. Aug. 31 launch try was scrubbed about five and a half hours before liftoff due to failure of one of orbiter's three fuel cells. Fuel cell No. 2 indicated higher than allowable temperatures during activation as countdown proceeded. Fuel cell was removed and replaced. Liftoff on Sept. 7 was preceded by a smooth countdown.

First of two primary payloads, Spartan 201-03, deployed on flight day two. This was the third Spartan 201 mission in planned series of four. Primary objective was to study outer atmosphere of sun and its transition into solar wind that constantly flows past Earth. Timing of Spartan 201-03 flight intended to coincide with passage of the Ulysses spacecraft over the sun's north polar region to expand range of data being collected about origins of solar wind. Spartan 201-03 configuration featured two scientific instruments, the Ultraviolet Coronal Spectrometer (UVCS) and the White Light Coronagraph (WLC). UVCS measured characteristics of light emitted by neutral hydrogen atoms in the solar corona, the outermost portion of the sun's atmosphere from which the solar wind evolves. The WLC imaged the changing shape and form of the corona.

Concerns arose about performance of the two instruments when Spartan was retrieved after about two days of data-gathering. As orbiter approached free-flying spacecraft, it was rotating slowly and located in a different attitude than expected for retrieval. However, later analysis confirmed UVCS and WLC operated smoothly, with WLC obtaining good data over 95 percent of planned observing sequence and UVCS preliminary data found to be excellent. Analysis was under way to determine why Spartan behaved as it did prior to retrieval.

Second primary payload, Wake Shield Facility-2 (WSF-2) deployed on flight day five and became first spacecraft to maneuver itself away from orbiter rather than other way around, by firing small cold gas nitrogen thruster to maneuver away from Endeavour. WSF-2 second in planned series of four flights. WSF is a 12-foot- (3.7-meter) diameter stainless steel disk designed to generate an ultravacuum environment in space within which to grow thin films for next generation advanced electronics.

Seven planned thin firm growth runs planned, but after three successful growths, WSF-2 placed itself in safe mode. Mission planners decided to extend WSF-2 flying time by about 24 hours to allow all seven thin film growths to be performed. However, as preparations began to resume operations after a 20-hour hiatus, payload controllers on the ground could not trigger the flow of thin film material and the WSF-2 was once again shut down. Film growth activities resumed after a six-hour cool-down of the WSF-2 instruments, and when spacecraft was retrieved on flight day eight, four successful thin film growth runs had been completed.

WSF-2 unberthed and hung over side of Endeavour's cargo bay one final time for Charging Hazards and Wake Studies (CHAWS) experiment, an Air Force-sponsored experiment to collect data on buildup of electrical fields around an orbiting space vehicle.

On flight day ten, Voss and Gernhardt conducted six-hour, 46-minute spacewalk, completing final primary objective of STS-69. They evaluated thermal improvements made to their extravehicular activity suits and reported they remained comfortable, and also tested variety of tools and techniques that may be used in assembly of International Space Station.

STS-69 also was second flight of a "dog crew," a flight crew tradition that began on STS-53, on which both Walker and Voss flew. As the Dog Crew II, each STS-69 astronaut adopted a dogtag or nickname: Walker was Red Dog; Cockrell was Cujo; Voss, Dog Face; Newman, Pluto; and Gernhardt, Under Dog.