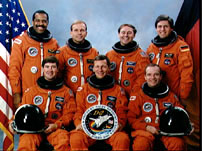 The launch was first set for late February and slipped to early March after questions arose about the turbine blade tip seal retainers in the high pressure oxidizer turbopumps on the orbiter main engines. When engineers could not verify whether old or new retainers were on Columbia, NASA opted to replace all three turbopumps at the pad as a precautionary
measure.

The launch date of March 14 slipped again after a hydraulic flex hose burst in the aft compartment during the Flight Readiness Test. All 12 hydraulic lines in the aft were removed and inspected; nine lines were re-installed and three new lines were put in.

Launch was reset for March 21 and pushed back 24 hours due to range conflicts caused by a Delta II one-day launch delay. The liftoff attempt on March 22 was aborted at T-3 seconds by the orbiter computers due to an incomplete ignition of the number three main engine. The liquid oxygen preburner check valve leaked internally, causing overpressurized purge system which in turn precluded full engine ignition. This was the first on-the-pad main engine abort since return-to-flight, and third in program history (51-F and 41-D other two). The valve leak was later traced to contamination during manufacturing. NASA decided to replace all three main engines on Columbia with spares.

The launch was reset for April 24, but scrubbed early launch morning when one of the three inertial measurement units (IMUs) on the orbiter gave a possible faulty reading. The liftoff was postponed 48 hours to allow for removal and replacement of the IMU. The final launch countdown on April 26 proceeded smoothly. This was the last launch scheduled from Pad A until February 1994 to allow for pad refurbishment and modification.

Problems encountered were an overheating orbiter refrigerator/freezer unit in middeck which forced reliance on backup to store experiment samples, and a leaking nitrogen line in wastewater tank which required an on-orbit fix. Communications with Columbia was lost for about an hour and a half on May 4 due to errant command from Mission Control in Houston. On May 2, mission managers determined enough electrical power remained to extend the flight by one day.