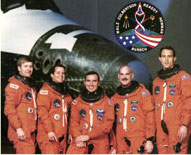 Launch was again delayed until 9:10 a.m. EDT on August 12 due to concerns about the Perseid meteor shower which is expected to peak on the evening of August 11. The Perseid event, which happens each August, is one of about a dozen such occasions each year that are the result of a comet's nucleus shedding debris along its orbital path as it approaches the Sun. When Earth's orbit passes through the debris field it causes meteor showers activity or "shooting stars." The concern with the Perseid event was that the activity is expected to be extremely heavy this year and thus there was an increased chance that a spacecraft in Earth orbit could be damaged by a piece of the debris.

Launch on August 12 was scrubbed at the T-3 second mark following a redundant set launch sequencer (RSLS) abort. The cause for the RSLS abort was a faulty sensor that monitors fuel flow through main engine #2. Engine cutoff occurred at 9:12:32 a.m. EDT. There are two sensors which are part of the flow meter that monitor the flow of hydrogen through the main engine. Each sensor has a Channel A and Channel B for a total of four readings. These sensors are monitoring the fuel flow from main engine ignition through main engine cutoff.

The sensors are redundant so that all four channels must report an acceptable fuel flow rate prior to liftoff. Data indicates that Channel A on the number two sensor failed. There was no electrical output at all from this sensor while the others were found to have operated normally. A completely redundant set of measurements is required to commit to flight. All three of Discovery's main engines were removed and replaced with a set from Endeavour at the Pad. Tests conducted under cryogenic conditions were successful in duplicating the sensor failure that caused the launch scrub.

On September 9, the pickup of the launch count was delayed pending the outcome of the ACTS Independent Review Team. This team met to review the design of the ACTS spacecraft in light of the recent loss of contact with the Mars Observer spacecraft and the failure of the NOAA-13 weather satellite. All three spacecraft are manufactured by Martin Marietta. TOS contains two transistors manufactured in the same manner as those made by Unitrode that are suspected in the failure of Mars Observer.