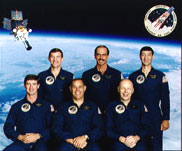 The launch set for November 19 was delayed due to a malfunctioning redundant inertial measurement unit on the Inertial Upper Stage booster attached to the Defense Support Program satellite. The unit was replaced and tested. The launch was reset for November 24, delayed 13 minutes to allow an orbiting spacecraft to pass and allow external tank liquid oxygen replenishment after minor repairs to the valve in the liquid oxygen replenishment system in the mobile launcher platform.