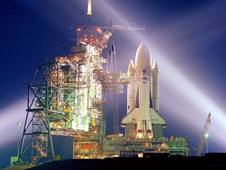 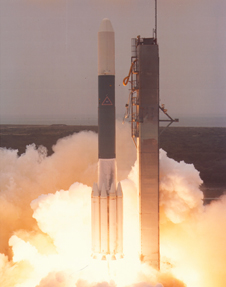 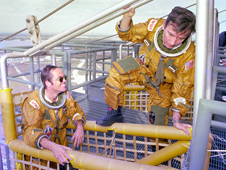 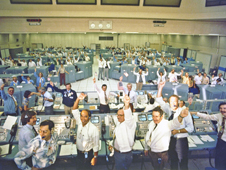 Image above: The STS-1 space shuttle team celebrates a successful liftoff of Columbia from Launch Pad 39A a few seconds past 7 a.m. on April 12, 1981. Image credit: NASA
› View larger image 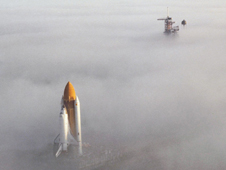 Image above: Space shuttle Challenger makes a surrealistic impression as it moves through the fog on its way down the 3.5-mile crawlerway en route to Launch Pad 39A on Nov. 30, 1982. Image credit: NASA › View larger image

During the 1980s, Kennedy Space Center made a critical shift in focus. Instead of moving relatively quickly from one human spaceflight program to another, as in the fast-paced 1960s and 1970s, the spaceport's workforce and facilities now were geared toward preparing and launching a revolutionary new spacecraft that would further advance our capabilities in orbit: the space shuttle.

Kennedy was tasked with the vital role of maintaining the "processing flow" -- refurbishing and preparing each vehicle between flights, launching it safely, ensuring the safety of orbiter and crew after landing, and returning it to Kennedy's orbiter processing facility to begin the process again. During this decade, the Kennedy team launched 32 flights of the space shuttle, then known as the Space Transportation System (STS).

"Before we did STS-1, there had been some, I guess, things going on in the (United) States that -- the morale of the United States, I don't think, was very high," recalled Crippen, who later served as director of Kennedy.

"It was truly a morale booster for the United States, and I was pleasantly surprised to find that it was welcomed by what I would call our allies abroad. So it was obvious that it was a big deal," Crippen said.

As 1980 began, work already was well under way readying Columbia for the STS-1 mission, still months away. But at the same time, teams at Cape Canaveral Air Force Station were preparing for the spaceport's first NASA launch of the decade. The Solar Maximum Mission, or "SolarMax," was lofted into space by a Delta rocket Feb. 14, 1980, embarking on a flight to study our sun during the peak of the solar cycle.

The first launch of the space shuttle on April 12, 1981, became an iconic moment for NASA and for the nation. Columbia's launch plume was a welcome sight to the Kennedy workforce who had labored for years to reach this point. Liftoff came after a precise, on-schedule countdown.

"Everything was going good. The weather was looking good. About one minute to go, I turned to John. I said, 'I think we might really do it,' and about that time, my heart rate started to go up," Crippen said. "And sure enough, the count came on down, and the main engines started. The solid rockets went off, and away we went."

Columbia stayed aloft for two days as Young and Crippen kept busy verifying the spacecraft's systems. The final test came April 14 when the orbiter and crew completed the program's first deorbit burn, decelerated out of orbit and glided to a landing, kicking up dust as its main landing gear made contact with the dry lake bed at Edwards Air Force Base in California.

The flight's success garnered worldwide attention, even intersecting with early-1980s pop culture. Canadian rock band Rush was so inspired by Columbia's first launch, the group recounted the experience in "Countdown," the closing track on the trio's "Signals" album.

MTV kicked off its first broadcast at 12:01 a.m. August 1, 1981, with footage of Columbia's countdown and liftoff, the Apollo 11 launch, then the landing on the moon as an astronaut saluted the MTV flag and a voice-over announced, "Ladies and gentlemen: rock and roll."

The "firsts" ticked by one after another as the Space Shuttle Program progressed. The STS-2 mission marked the first reuse of a space vehicle, as Columbia made its second flight. Sally Ride became the first American woman in space when she flew aboard Challenger in 1983; the next mission was the first to launch and land at night, and included the first African-American astronaut, Guion "Guy" Bluford. Challenger was the first orbiter to come home for landing, touching down on Kennedy's Shuttle Landing Facility in 1984 to conclude the STS-41B mission.

Another major "first" took place on the very next flight, STS-41C, when the crew of Challenger successfully captured, repaired and redeployed the SolarMax spacecraft, prolonging its life in orbit.

NASA developed the Tracking and Data Relay Satellite system in order to provide reliable communications for the space shuttle and other spacecraft in low Earth orbit. Today, a total of nine TDRS satellites have been placed in orbit, including six deployed during space shuttle missions and three carried aloft aboard Atlas IIa rockets.

Kennedy kept pace as shuttle missions flew with increasing frequency, from only two flights in 1981 to nine in 1985.

Then, the nation received a sharp reminder that spaceflight is never routine.

The Kennedy family grieved along with the nation. With a new center director, Forrest S. McCartney, at the helm, the workforce focused its efforts on preparing space shuttle Discovery for the next mission, STS-26. Brevard County roads were packed with spectators on Sept. 29, 1988, as Discovery lifted off on the first flight after the Challenger accident, returning the space shuttle to flight after two-and-a-half years.

"It was a privilege and honor to have been a part of the Kennedy Space Center team during the Return to Flight activities following the Challenger accident," McCartney said. "The KSC shuttle workforce was a world class group of professionals that made their mark on space flight history. I will always be grateful to them for letting me join their team."

The space shuttle paved the way for scientific research across a wide variety of disciplines, including biology and materials science. The reusable Spacelab research module, Spacelab pallet or Spacelab Multipurpose Experiment Support Structure flew in the payload bay to further expand the vehicle's capacity for in-orbit science.

Kennedy closed out the 1980s as busy as ever, with five shuttle missions launched in 1989. On two of those flights, Atlantis deployed spacecraft that made a lasting impact on our understanding of our planetary neighbors: the Magellan spacecraft to Venus and the Galileo probe to Jupiter.

President Ronald Reagan set the stage for the future of U.S. human spaceflight in his State of the Union address on Jan. 25, 1984, when he challenged NASA to develop an international, permanently crewed space station.

"A space station will permit quantum leaps in our research in science, communications, and in metals and lifesaving medicines which could be manufactured only in space," Reagan stated. "We want our friends to help us meet these challenges and share in their benefits. NASA will invite other countries to participate so we can strengthen peace, build prosperity, and expand freedom for all who share our goals."

The experiences and triumphs achieved at Kennedy during the 1980s helped put the agency on course to make Reagan's vision a reality in the decades to come.
Anna Heiney
NASA's John F. Kennedy Space Center
› Back To Top