Grow Text SizeShrink Text Size
NASA's RXTE Captures Thermonuclear Behavior of Unique Neutron Star
A neutron star is the closest thing to a black hole that astronomers can observe directly, crushing half a million times more mass than Earth into a sphere no larger than a city. In October 2010, a neutron star near the center of our galaxy erupted with hundreds of X-ray bursts that were powered by a barrage of thermonuclear explosions on the star's surface. NASA's Rossi X-ray Timing Explorer (RXTE) captured the month-long fusillade in extreme detail. Using this data, an international team of astronomers has been able to bridge a long-standing gap between theory and observation.

"In a single month from this unique system, we have identified behavior not seen in observations of nearly 100 bursting neutron stars during the past 30 years," said Manuel Linares, a postdoctoral researcher at the Kavli Institute for Astrophysics and Space Research at the Massachusetts Institute of Technology in Cambridge. He led a study of the RXTE data that will be published in the March 20 issue of The Astrophysical Journal. 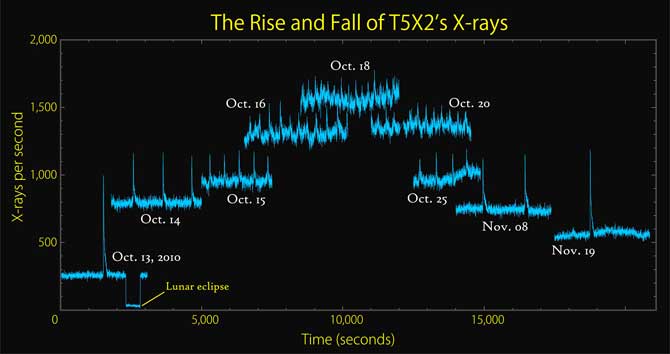 This graph based on RXTE data provides an overview of the changing character of T5X2's X-ray emission during outbursts from Oct. 13 to Nov. 19, 2010. As the persistent X-ray emission rises (upward steps in the plot), the burst rate increases while the burst brightness decreases. The abrupt dropout on Oct. 13 occurred when the moon briefly covered the source. Credit: NASA/Goddard Space Flight Center
› Larger image
On Oct. 10, 2010, the European Space Agency's INTEGRAL satellite detected a transient X-ray source in the direction of Terzan 5, a globular star cluster about 25,000 light-years away toward the constellation Sagittarius. The object, dubbed IGR J17480–2446, is classed as a low-mass X-ray binary system, in which the neutron star orbits a star much like the sun and draws a stream of matter from it. As only the second bright X-ray source to be found in the cluster, Linares and his colleagues shortened its moniker to T5X2.

Three days after the source's discovery, RXTE targeted T5X2 and detected regular pulses in its emission, indicating that the object was a pulsar -- a type of neutron star that emits electromagnetic energy at periodic intervals. The object's powerful magnetic field directs infalling gas onto the star's magnetic poles, producing hot spots that rotate with the neutron star and give rise to X-ray pulses. At NASA's Goddard Space Flight Center in Greenbelt, Md., RXTE scientists Tod Strohmayer and Craig Markwardt showed that T5X2 spins at a sedate -- for neutron stars -- rate of 11 times a second. And because the pulsar's orbital motion imparts small but regular changes in the pulse frequency, they showed that the pulsar and its sun-like companion revolve around each other every 21 hours. 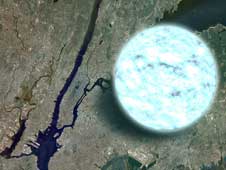 › Larger image
This illustration compares the size of a neutron star to Manhattan. The crushed core of a star that has exploded as a supernova, a neutron star packs more mass than the sun into a sphere just 10 to 15 miles wide. Credit: NASA/Goddard Space Flight Center That same day, RXTE observed its first burst from the system: an intense spike in X-rays lasting nearly 3 minutes and caused by a thermonuclear explosion on the neutron star's surface. Ultimately, RXTE cataloged some 400 events like this between Oct. 13 and Nov. 19, with additional bursts observed by INTEGRAL and NASA's Swift and Chandra observatories. NASA decommissioned RXTE on Jan. 5, 2012.

In the T5X2 system, matter streams from the sun-like star to the neutron star, a process called accretion. Because a neutron star packs more than the sun's mass into a sphere between 10 and 15 miles across -- about the size of Manhattan or the District of Columbia -- its surface gravity is extremely high. The gas rains onto the pulsar's surface with incredible force and ultimately coats the neutron star in a layer of hydrogen and helium fuel. When the layer builds to a certain depth, the fuel undergoes a runaway thermonuclear reaction and explodes, creating intense X-ray spikes detected by RXTE and other spacecraft. The bigger the blast, the more intense its X-ray emission.

Models designed to explain these processes made one prediction that had never been confirmed by observation. At the highest rates of accretion, they said, the flow of fuel onto the neutron star can support continuous and stable thermonuclear reactions without building up and triggering episodic explosions. 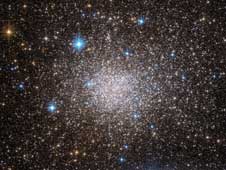 › Larger image
Terzan 5, which hosts the T5X2 system, is a dense globular star cluster located 25,000 light-years away toward the constellation Sagittarius. Credit: ESA/Hubble and NASA At low rates of accretion, T5X2 displays the familiar X-ray pattern of fuel build-up and explosion: a strong spike of emission followed by a long lull as the fuel layer reforms. At higher accretion rates, where a greater volume of gas is falling onto the star, the character of the pattern changes: the emission spikes are smaller and occur more often.

But at the highest rates, the strong spikes disappeared and the pattern transformed into gentle waves of emission. Linares and his colleagues interpret this as a sign of marginally stable nuclear fusion, where the reactions take place evenly throughout the fuel layer, just as theory predicted.

"We see T5X2 as a 'model burster,' the one that's doing everything expected of it," said Diego Altamirano, an astrophysicist at the University of Amsterdam in The Netherlands and a co-author on the paper describing the findings.

The question now before the team is why this system is so different from all others studied in previous decades. Linares suspects that T5X2's slow rotation may hold the key. Faster rotation would introduce friction between the neutron star’s surface and its fuel layers, and this frictional heat may be sufficient to alter the rate of nuclear burning in all other bursting neutron stars previously studied.