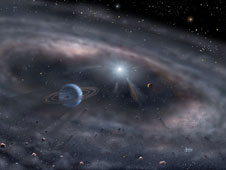 Planets form around a young star in this artist's concept. Using the Keck Interferometer in Hawaii, astronomers have probed the structure of a dust disk around MWC 419 to within 50 million miles of the star. Credit: David A. Hardy/www.astroart.org
› Larger image The inner regions of young planet-forming disks offer information about how worlds like Earth form, but not a single telescope in the world can see them. Yet, for the first time, astronomers using the W. M. Keck Observatory in Hawaii have measured the properties of a young solar system at distances closer to the star than Venus is from our sun.

"When it comes to building rocky planets like our own, the innermost part of the disk is where the action is," said team member William Danchi at NASA's Goddard Space Flight Center in Greenbelt, Md. Planets forming in a star's inner disk may orbit within its "habitable zone," where conditions could potentially support the development of life.

To achieve the feat, the team used the Keck Interferometer to combine infrared light gathered by both of the observatory's twin 10-meter telescopes, which are separated by 85 meters. The double-barreled approach gives astronomers the effective resolution of a single 85-meter telescope -- several times larger than any now planned.

"Nothing else in the world provides us with the types of measurements the Keck Interferometer does," said Wesley Traub at Caltech's Jet Propulsion Laboratory in Pasadena, Calif. "In effect, it's a zoom lens for the Keck telescopes."

In August 2008, the team -- led by Sam Ragland of Keck Observatory and including astronomers from the California Institute of Technology and the National Optical Astronomical Observatory -- observed a Young Stellar Object (YSO) known as MWC 419. The blue, B-type star has several times the sun's mass and lies about 2,100 light-years away in the constellation Cassiopeia. With an age less than ten million years, MWC 419 ranks as a stellar kindergartener.

The team also employed a new near-infrared camera designed to image wavelengths in the so-called L band from 3.5 to 4.1 micrometers. "This unique infrared capability adds a new dimension to the Keck Interferometer in probing the density and temperature of planet-forming regions around YSO disks. This wavelength region is relatively unexplored," Ragland explained. "Basically, anything we see through this camera is brand new information."

The increased ability to observe fine detail, coupled with the new camera, let the team measure temperatures in the planet-forming disk to within about 50 million miles of the star. "That's about half of Earth's distance from the sun, and well within the orbit of Venus," Danchi said.

For comparison, the planets directly detected around the stars HR 8799, Fomalhaut and GJ 758 orbit between 40 and 100 times farther away.

The team reported temperature measurements of dust at various regions throughout MWC 419's inner disk in the Sept. 20 issue of The Astrophysical Journal. Temperature differences help shed light on the inner disk's detailed structure and may indicate that its dust has different chemical compositions and physical properties, factors that may play a role in the types of planets that form. For example, conditions in our solar system favored the formation of rocky worlds from Mars sunward, whereas gas giants and icy moons assembled farther out.

In turn, the astronomers note, the size of the young star might affect the composition and physical characteristics of its dust disk. The team is continuing to use the Keck Interferometer in a larger program to observe planet-forming disks around sun-like stars.

The Keck Interferometer was developed by the Jet Propulsion Laboratory and the W.M. Keck Observatory. It is managed by the W.M. Keck Observatory, which operates two 10-meter optical/infrared telescopes on the summit of Mauna Kea on the island of Hawaii and is a scientific partnership of the California Institute of Technology, the University of California and NASA. NASA's Exoplanet Science Institute manages time allocation on the telescope for NASA.