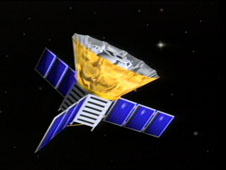 This COBE informational video was produced more than 20 years ago, before the satellite embarked on its mission to study the cosmic microwave background. Credit: NASA Goddard
› Watch video NASA's Cosmic Background Explorer (COBE) satellite rocketed into Earth orbit on Nov. 18, 1989, and quickly revolutionized our understanding of the early cosmos. Developed and built at Goddard Space Flight Center in Greenbelt, Md., COBE precisely measured and mapped the oldest light in the universe -- the cosmic microwave background.

COBE showed that the radiation's spectrum agrees exactly with predictions based on the Big Bang theory. And COBE's map of slight hot and cold spots within this background let scientists glimpse the roots of cosmic structure we see around us today. In essence, COBE produced the first "baby picture" of the universe.

For these results, COBE scientists John Mather, at Goddard, and George Smoot, at the University of California, Berkeley, shared the 2006 Nobel Prize in physics. The mission ushered cosmologists into a new era of precision measurements, paving the way for deeper exploration of the microwave background by NASA's ongoing WMAP mission and the European Space Agency's new Planck satellite.

Image Credit: NASA
› Larger image
The cosmic microwave background radiation is a remnant of the Big Bang. These minute temperature variations (depicted here as varying shades of blue and purple) are linked to slight density variations in the early universe. These variations are believed to have given rise to the structures that populate the universe today: clusters of galaxies, as well as vast, empty regions. This image, representing data collected between 1990 and 1992, received much publicity at the time. It was later superseded by a more accurate four-year COBE map.