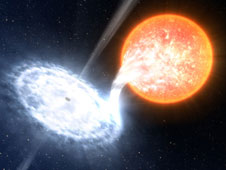 > View Hi-Res
XTE J1550-564 is a binary system in which an evolved star orbits -- and donates matter to -- a black hole estimated at 10 times the sun's mass. Credit: ESO/L. Calçada 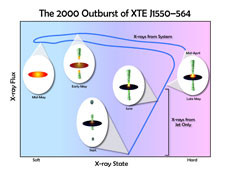 > View Hi-Res
> Print Resolution
In April 2000, XTE J1550-564 erupted. The blue line indicates the energy and brightness of X-rays from the system as detected by NASA's Rossi X-ray Timing Explorer. Insets show where the X-rays are thought to originate in the vicinity of the black hole. From June to September, the system's particle jets produced most of the X-rays. Credit: NASA/RXTE 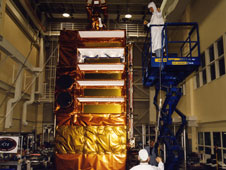 > View Hi-Res
The Rossi X-ray Timing Explorer spacecraft undergoes pre-launch tests in 1995. Credit: NASA/GSFC For decades, X-ray astronomers have studied the complex behavior of binary systems pairing a normal star with a black hole. In these systems, gas from the normal star streams toward the black hole and forms a disk around it. Friction within the disk heats the gas to millions of degrees -- hot enough to produce X-rays. At the disk's inner edge, near the black hole, strong magnetic fields eject some of the gas into dual, oppositely directed jets that blast outward at about half the speed of light.

That's the big picture, but the details have been elusive. For example, do most of the X-rays arise from the jets? The disk? Or from a high-energy region on the threshold of the black hole?

Now, astronomers using NASA's Rossi X-ray Timing Explorer (RXTE) satellite, together with optical, infrared and radio data, find that, at times, most of the X-rays come from the jets.

"Theoretical models have suggested this possibility for several years, but this is the first time we've confirmed it through multiwavelength analysis," said David Russell, lead author of the study and a post-doctoral researcher at the University of Amsterdam.

Russell and his colleagues looked at a well-studied outburst of the black-hole binary XTE J1550-564. The system lies 17,000 light-years away in the southern constellation of Norma and contains a black hole with about 10 times the sun's mass. The usually inconspicuous binary was discovered by RXTE in 1998, when the system briefly became one of the brightest X-ray sources in the sky.

Between April and July 2000, the system underwent another outburst. RXTE monitored the event in X-rays, with some additional help from NASA's Chandra X-ray Observatory. Optical and infrared observations covering the outburst came from the YALO 1-meter telescope at Cerro Tololo Inter-American Observatory in Chile, while radio observations were collected by the Australia Telescope Compact Array.

Drawing on these data, Russell and his team reconstructed a detailed picture of X-ray emission during the outburst. The study appears in the July 1 edition of Monthly Notices of the Royal Astronomical Society.

"We suspect that these outbursts are tied to increases in the amount of mass falling onto the black hole," explained Russell. "Where and how the emission occurs are the only clues we have to what's going on."

As the outburst began in mid-April 2000, the system's brightest X-ray emission was dominated by higher-energy ("hard") X-rays from a region very close to the black hole.

"We think the source of these X-rays is a region of very energetic electrons that form a corona around the innermost part of the disk," Russell said. When these electrons run into photons of visible light, the collision boosts the photons to hard X-ray energies, a process known as inverse Compton scattering. The jets were present, but only minor players.

Over the next couple of weeks, the peak X-ray emission moved to lower ("softer") energies and seems to have come from the dense gas in the accretion disk. At the same time, the hot disk quenched whatever process powers the jets and shut them down.

By late May 2000, XTE J1550-564's accretion disk was cool enough that the jets switched on again. Most of the X-rays, which were fainter but higher in energy, again came from scattering off of energetic electrons close to the black hole.

In early June, as the system faded and its peak emission gradually softened, the jets emerged as the main X-ray source. In the jet, electrons and positrons moving at a substantial fraction of light speed emit the radiation as they encounter magnetic fields, a process called synchrotron emission.

The jets require a continuous supply of particles with energies of a trillion electron volts -- billions of times the energy of visible light. "The total energy bound up in the jet is enormous, much larger than previously thought," Russell said.

As summer wore on, the jets gradually faded and their X-ray emission softened. By September, the system's brightest X-rays came from high-speed blobs of matter that the jets had hurled into space during previous eruptions.

"We're really beginning to get a handle on the 'ecology' of these extreme systems, thanks in large part to RXTE," Russell added. "We can apply what we've learned in nearby binaries like XTE J1550 to the supersized black holes and jets found at the centers of galaxies."