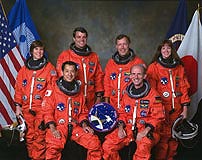 STS-99 faced a series of launch delays and one scrub before launching successfully. The mission was originally scheduled to fly on Sept. 16, 1999. But in mid-August, the launch date was postponed until October because of wiring concerns throughout the shuttle fleet. With so much of Endeavour's wiring requiring inspection, the target date for launch was shifted to no earlier than Nov. 19. Shuttle managers later decided to preserve the option to launch either STS-99, or STS-103, the third Hubble Servicing Mission, first. It was decided in October that STS-103 would fly first, and the launch of STS-99 was set for Jan. 13, 2000. In December that date came under review, and a new launch date of no earlier than Jan. 31 was set.

The scheduled launch on Jan. 31, 2000, was scrubbed because of unacceptable weather conditions. However, late in the count, an anomaly occurred with the No. 2 enhanced master events controller (EMEC), which also would have prevented the launch on that day. The EMEC was removed and replaced and the launch rescheduled until 12:30 p.m. EST on Feb. 11. About three hours prior to the scheduled launch, an unexpected pressure drop was detected in hydraulic system 1. The pressure drop was determined to be the result of a normal sequence of prelaunch events. Discussions of the pressure drop resulted in a 13-minute, 40-second launch delay.

The Shuttle Radar Topography Mission mast was deployed successfully to its full length, and the antenna was turned to its operation position. After a successful checkout of the radar systems, mapping began at 12:31 a.m., less than 12 hours after launch. Crewmembers, split into two shifts so they could work around the clock, began mapping an area from 60 degrees north to 56 degrees south. Data was sent to Jet Propulsion Laboratory for analysis and early indications showed the data to be of excellent quality.

Mapping proceeded fairly smoothly, but during an attitude-hold period for payload mapping during the second day of flight, it was determined that orbiter propellant usage had doubled from 0.07 to 0.15 percent an hour. The increase was caused by a failure of the payload cold-gas thrust system that was used to offset the gravity gradient torque of the mast.

As a result of this failure, orbiter propellant was being used at a higher-than-planned rate to maintain the attitude of the vehicle. Measures to reduce the expenditure were evaluated and based on the analysis, enough propellant could be saved to complete the planned 9-day plus science mission.

The first of a series of "flycast" maneuvers during the mission was also made on the second day of flight. The flycast maneuver was designed to reduce strain on the almost-200-foot mast extending from Endeavour's cargo bay when adjustments to Endeavour's orbit were needed.

The orbiter, which flies tail-first during mapping operations, is moved to a nose-first attitude with the mast extending upward. A brief reaction control system pulse begins the maneuver. The mast deflects slightly backwards, then rebounds forward. As it reaches vertical, a stronger thrust is applied, arresting the mast's motion and increasing the orbiter's speed.

Radar data gathering concluded at 6:54 a.m. EST on the tenth day of flight after a final sweep across Australia. During 222 hours and 23 minutes of mapping, Endeavour's radar images filled 332 high density tapes and covered 99.98 percent of the planned mapping area -- land between 60 degrees north latitude and 56 degrees south latitude -- at least once and 94.6 percent of it twice. Only about 80,000 square miles in scattered areas remained unimaged, most of them in North America and most already well mapped by other methods. Enough data was gathered to fill the equivalent of 20,000 CD's.

Also aboard Endeavour was a student experiment called EarthKAM, which took 2,715 digital photos during the mission through an overhead flight-deck window. The NASA-sponsored program lets middle school students select photo targets and receive the images via the Internet. The pictures are used in classroom projects on earth science, geography, mathematics and space science. More than 75 middle schools around the world participated in the experiment, which set a record. On four previous flights combined, EarthKAM sent down a total of 2,018 images.