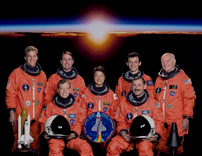 At 12:30 p.m., the hatch was closed with crew inside the space shuttle Discovery, just as President Bill Clinton's Air Force One plane touched down at the Cape Canaveral Air Station skid strip. The countdown proceeded to T-9 minutes, but was held an additional 8.5 minutes while the launch team discussed the status of a master alarm heard during cabin leak checks after hatch closure. Once the count picked up and the Orbiter Access Arm was retracted, the Range Safety Officer (RSO) requested a hold at T-5 minutes due to aircraft in the restricted air space around KSC. Once the aircraft cleared the area, the RSO gave the all clear signal and the countdown proceeded. Following main engine start, but prior to booster ignition, the drag chute compartment door fell off, but posed no problem for the mission. Managers decided not to deploy the chute upon landing.

The primary objectives of STS-95 included conducting a variety of science experiments in the pressurized SPACEHAB module, the deployment and retrieval of the Spartan free-flyer payload, and operations with the Hubble Space Telescope Orbiting Systems Test (HOST) and the International Extreme Ultraviolet Hitchhiker payloads being carried in the payload bay. The scientific research mission also returned space pioneer John Glenn to orbit - 36 years, eight months and nine days after he became the first American to orbit the Earth.

A slate of more than 80 experiments filled the nearly nine days in space. In addition to a variety of medical and material research, the crew released the Petite Amateur Naval Satellite, or PANSAT, to test innovative technologies to capture and transmit radio signals that normally would be lost because the original signals were too weak or contained too much interference. The crew also released the Spartan free-flying satellite to study the sun and the solar wind in a research effort to help scientists better understand a phenomenon that sometimes can cause widespread disruptions of communications and power supplies on Earth.

Medical research during the mission included a battery of tests on Payload Specialist Glenn and Mission Specialist Pedro Duque to further research how the absence of gravity affects balance and perception, immune system response, bone and muscle density, metabolism and blood flow, and sleep.

The Hubble Space Telescope Orbital Systems Test provided an on-orbit test bed for hardware that will be used during the third Hubble servicing mission.