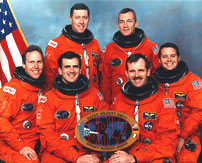 STS-68 marked second flight in 1994 of Space Radar Laboratory (first flight was STS-59 in April), part of NASA's Mission to Planet Earth. Flying SRL during different seasons allowed comparison of changes between first and second flights. SRL-2 was activated on flight day one, and around-the-clock observations conducted by astronauts split into two teams. Besides repeating data takes over same locations as on first flight, unusual events also imaged, including erupting volcano in Russia and islands of Japan after earthquake there. Also tested was ability of SRL-2 imaging radars, Spaceborne Imaging Radar-C (SIR-C) and X- band Synthetic Aperture Radar (X-SAR), to discern difference between such human-induced phenomena as an oil spill in the ocean and naturally occurring film.

On flight day six, mission extended one day by Mission Management Team. The maneuvering capability of the orbiter was demonstrated anew in the latter half of mission, when different data-gathering method was tried. Called interferometry, it required repeated, nearly coincidental imaging passes with SIR-C/X-SAR over target sites. In one instance, Endeavour piloted to within 30 feet (nine meters) of where it was flown on first flight in April. Collected data can be transcribed into detailed topographic images showing elevation and other features. Interferometric passes completed over central North America, Amazon forests of central Brazil, and volcanoes of Kamchatka Peninsula in Russia. Such images, if produced regularly over long term, could provide information on the movements of Earth's surface as small as fraction of an inch, which could be invaluable in detecting pre-eruptive changes in volcanoes and movements in fault lines before earthquakes.