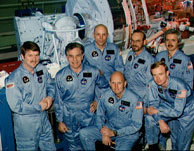 A major objective of the mission was to verify the performance of the Spacelab systems with the orbiter as well as to measure the environment created by the vehicle in space.

The launch countdown July 12 halted at T-3 seconds after main engine ignition when a malfunction of the number two space shuttle main engine (SSME) coolant valve caused a shutdown of all three main engines. The launch on July 29 was delayed 1 hour, 37 minutes due to a problem with the table maintenance block update uplink. 5 minutes, 45 seconds into ascent, the number one main engine shutdown prematurely, resulting in an Abort To Orbit (ATO) trajectory.