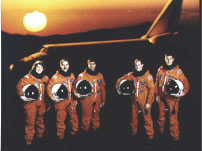 The launch was originally set for July 23, but was moved to July 24 to allow time to replace a faulty integrated electronics assembly that controls orbiter/external tank separation. The mission was postponed again about five hours before liftoff on July 24 due to a faulty main engine controller on the number three main engine. The controller was replaced and retested; launch was reset for August 1. Liftoff set for 11:01 a.m. delayed due to cabin pressure vent valve reading and postponed at 12:28 p.m. due to unacceptable return-to-launch site weather conditions. Launch reset for August 2.