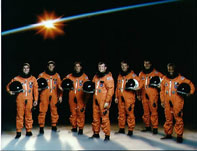 The launch was originally scheduled for March 9, but during processing work at Pad A, significant cracks were found on all four lug hinges on the two external tank umbilical door drive mechanisms. NASA managers opted to roll back the vehicle to the VAB on March 7, and then to OPF for repair. Hinges were replaced with units taken from orbiter Columbia, and reinforced. Discovery returned to the pad on April 1, launch was re-set for April 23. The mission was again postponed when, during prelaunch external tank loading, a transducer on the high-pressure oxidizer turbopump for main engine number three showed readings out of specification. The transducer and its cable harness were replaced and tested. Launch was rescheduled for April 28.