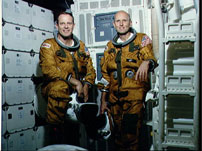 The launch was delayed one hour due to failure of a heater on the nitrogen gas ground support line.