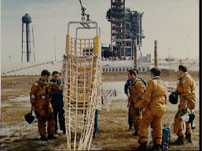 Launch originally set for Oct. 9 was rescheduled when a nitrogen tetroxide spill occurred during loading of the forward reaction control system. The launch scheduled for Nov. 4 delayed and then scrubbed when the countdown computer called for hold in the count due to an apparent low reading on fuel cell oxygen tank pressures. During the hold, high oil pressures were discovered in two of three auxiliary power units (APUs) that operate hydraulic system. APU gear boxes needed to be flushed and filters replaced, forcing the launch to reschedule. The launch on Nov. 12 delayed two hours, 40 minutes to replace the multiplexer/demultiplexer and additional nine minutes, 59 seconds to review systems status.

Modifications of the water sound suppression system at the pad to absorb the solid rocket booster overpressure wave during launch were effective -- no tiles were lost and only 12 were damaged.