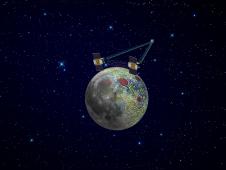 PASADENA, Calif. -- Twin NASA spacecraft that achieved orbit around the moon New Year's Eve and New Year's Day have new names, thanks to elementary students in Bozeman, Mont. Their winning entry, "Ebb and Flow," was selected as part of a nationwide school contest that began in October 2011.

The names were submitted by fourth graders from the Emily Dickinson Elementary School. Nearly 900 classrooms with more than 11,000 students from 45 states, Puerto Rico and the District of Columbia participated in the contest. Previously named Gravity Recovery And Interior Laboratory, or GRAIL-A and -B, the washing machine-sized spacecraft begin science operations in March, after a launch in September 2011.

"The 28 students of Nina DiMauro's class at the Emily Dickinson Elementary School have really hit the nail on the head," said Maria Zuber, GRAIL principal investigator from the Massachusetts Institute of Technology in Cambridge, Mass. "We were really impressed that the students drew their inspiration by researching GRAIL and its goal of measuring gravity. Ebb and Flow truly capture the spirit and excitement of our mission."

Zuber and Sally Ride, America's first woman in space and CEO of Sally Ride Science in San Diego, selected the names following the contest, which attracted 890 proposals via the Internet. The contest invited ideas from students ages 5 to 18 enrolled in U.S. schools. Although everything from spelling and grammar to creativity was considered, Zuber and Ride primarily took into account the quality of submitted essays.

"With submissions from all over the United States and even some from abroad, there were a lot of great entries to review," Ride said. "This contest generated a great deal of excitement in classrooms across America, and along with it an opportunity to use that excitement to teach science."

The winning prize for the Dickinson students is to choose the first camera images. Dickinson is one of nearly 2,000 schools registered for the MoonKAM program, which is led by Ride and her team at Sally Ride Science in collaboration with undergraduate students at the University of California in San Diego.

"These spacecraft represent not only great science, but great inspiration for our future," said Jim Green, director of NASA's Planetary Science Division in Washington. "As they study our lunar neighbor, Ebb and Flow will undergo nearly the same motion as the tides we feel here on Earth.”

Launched in September 2011, Ebb and Flow will be placed in a near-polar, near-circular orbit with an altitude of about 34 miles (55 kilometers). During their science mission, the duo will answer longstanding questions about the moon and give scientists a better understanding of how Earth and other rocky planets in the solar system formed.

NASA's Jet Propulsion Laboratory in Pasadena, Calif., manages the GRAIL mission for NASA's Science Mission Directorate in Washington. The GRAIL mission is part of the Discovery Program managed at NASA's Marshall Space Flight Center in Huntsville, Ala. Lockheed Martin Space Systems in Denver built the spacecraft. The California Institute of Technology in Pasadena manages JPL for NASA. To read the winning submission visit: https://moonkam.ucsd.edu/about/spacecraft_names . Information about MoonKAM is available online at: https://moonkam.ucsd.edu . For more information about GRAIL visit: http://www.nasa.gov/grail and http://grail.nasa.gov .