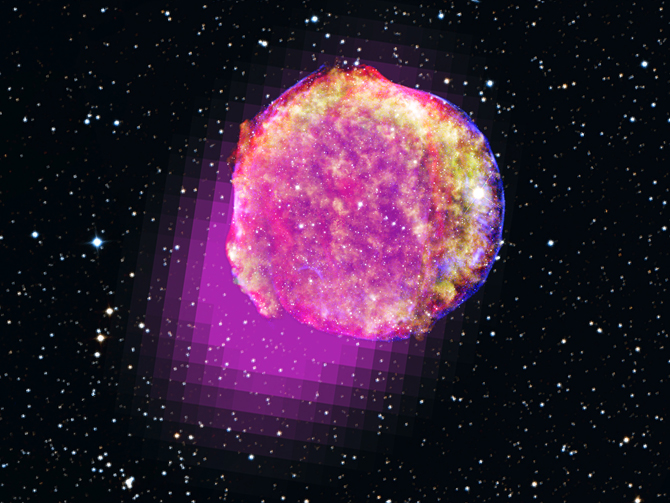 In early November 1572, observers on Earth witnessed the appearance of a "new star" in the constellation Cassiopeia, an event now recognized as the brightest naked-eye supernova in more than 400 years. It's often called "Tycho's supernova" after the great Danish astronomer Tycho Brahe, who gained renown for his extensive study of the object. Now, years of data collected by NASA's Fermi Gamma-Ray Space Telescope reveal that the shattered star's remains shine in high-energy gamma rays.

The detection gives astronomers another clue in understanding the origin of cosmic rays, subatomic particles -- mainly protons -- that move through space at nearly the speed of light. Exactly where and how these particles attain such incredible energies has been a long-standing mystery because charged particles speeding through the galaxy are easily deflected by interstellar magnetic fields. This makes it impossible to track cosmic rays back to their sources.

"Fortunately, high-energy gamma rays are produced when cosmic rays strike interstellar gas and starlight. These gamma rays come to Fermi straight from their sources," said Francesco Giordano at the University of Bari and the National Institute of Nuclear Physics in Italy. He is the lead author of a paper describing the findings in the Dec. 7 edition of The Astrophysical Journal Letters.

Better understanding the origins of cosmic rays is one of Fermi's key goals. Its Large Area Telescope (LAT) scans the entire sky every three hours, gradually building up an ever-deeper view of the gamma-ray sky. Because gamma rays are the most energetic and penetrating form of light, they serve as signposts for the particle acceleration that gives rise to cosmic rays.

"This detection gives us another piece of evidence supporting the notion that supernova remnants can accelerate cosmic rays," said co-author Stefan Funk, an astrophysicist at the Kavli Institute for Particle Astrophysics and Cosmology (KIPAC), jointly located at SLAC National Accelerator Laboratory and Stanford University, Calif.

In 1949, physicist Enrico Fermi -- the satellite's namesake -- suggested that the highest-energy cosmic rays were accelerated in the magnetic fields of interstellar gas clouds. In the decades that followed, astronomers showed that supernova remnants may be the galaxy's best candidate sites for this process.


When a star explodes, it is transformed into a supernova remnant, a rapidly expanding shell of hot gas bounded by the blast's shockwave. Scientists expect that magnetic fields on either side of the shock front can trap particles between them in what amounts to a subatomic pingpong game.

"A supernova remnant's magnetic fields are very weak relative to Earth's, but they extend across a vast region, ultimately spanning thousands of light-years. They have a major influence on the course of charged particles," said co-author Melitta Naumann-Godo at Paris Diderot University and the Atomic Energy Commission in Saclay, France, who led the study with Giordano.

As they shuttle back and forth across the supernova shock, the charged particles gain energy with each traverse. Eventually they break out of their magnetic confinement, escaping the supernova remnant and freely roaming the galaxy.

The LAT's ongoing sky survey provides additional evidence favoring this scenario. Many younger remnants, like Tycho's, tend to produce more high-energy gamma rays than older remnants. "The gamma-ray energies reflect the energies of the accelerated particles that produce them, and we expect more cosmic rays to be accelerated to higher energies in younger objects because the shockwaves and their tangled magnetic fields are stronger," Funk added. By contrast, older remnants with weaker shockwaves cannot retain the highest-energy particles, and the LAT does not detect gamma rays with corresponding energies.

The supernova of 1572 was one of the great watersheds in the history of astronomy. The star blazed forth at a time when the starry sky was regarded as a fixed and unchanging part of the universe. Tycho's candid account of his own discovery of the strange star gives a sense of how radical an event it was. 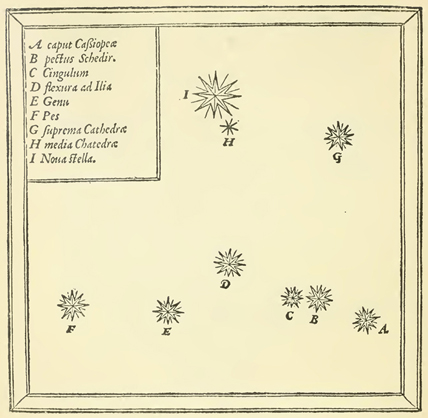 The supernova first appeared around Nov. 6, but poor weather kept it from Tycho until Nov. 11, when he noticed it during a walk before dinner. "When I had satisfied myself that no star of that kind had ever shone forth before, I was led into such perplexity by the unbelievability of the thing that I began to doubt the faith of my own eyes, and so, turning to the servants who were accompanying me, I asked them whether they too could see a certain extremely bright star…. They immediately replied with one voice that they saw it completely and that it was extremely bright," he recalled.

The supernova remained visible for 15 months and exhibited no movement in the heavens, indicating that it was located far beyond the sun, moon and planets. Modern astronomers estimate that the remnant lies between 9,000 and 11,000 light-years away.

After more than two and a half years of scanning the sky, LAT data clearly show that an unresolved region of GeV (billion electron volt) gamma-ray emission is associated with the remnant of Tycho's supernova. (For comparison, the energy of visible light is between about 2 and 3 electron volts.)

Keith Bechtol, a KIPAC graduate student who is also based at SLAC, was one of the first researchers to notice the potential link. "We knew that Tycho's supernova remnant could be an important find for Fermi because this object has been so extensively studied in other parts of the electromagnetic spectrum. We thought it might be one of our best opportunities to identify a spectral signature indicating the presence of cosmic-ray protons," he said.

The science team's model of the emission is based on LAT observations, along with higher-energy TeV (trillion electron volt) gamma rays mapped by ground-based facilities and radio and X-ray data. The researchers conclude that a process called pion production best explains the emission. First, a proton traveling close to the speed of light strikes a slower-moving proton. This interaction creates an unstable particle -- a pion -- with only 14 percent of the proton's mass. In just 10 millionths of a billionth of a second, the pion decays into a pair of gamma rays.

If this interpretation is correct, then somewhere within the remnant, protons are being accelerated to near the speed of light, and then interacting with slower particles to produce gamma rays, the most extreme form of light. With such unbelievable goings-on in what's left of his "unbelievable" star, it's easy to imagine that Tycho Brahe himself might be pleased.

› Reproduction of Tycho's book on the 1572 supernova