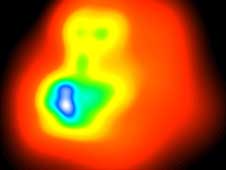 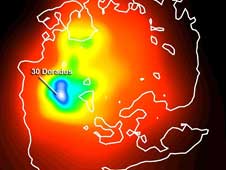 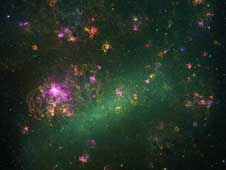 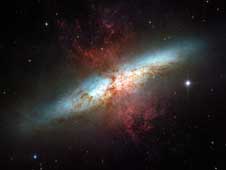 "Starburst galaxies have not been accessible in gamma rays before," said Fermi team member Seth Digel, a physicist at SLAC National Accelerator Laboratory in Menlo Park, Calif. "Most of the galaxies Fermi sees are exotic and distant blazars, which produce jets powered by matter falling into enormous black holes. But these new galaxies are much closer to us and much more like our own."

Gamma rays are the most energetic form of light. Fermi has detected more than a thousand point sources and hundreds of gamma-ray bursts, but the satellite also detects a broad glow that roughly follows the plane of our galaxy. This diffuse gamma-ray emission results when fast-moving particles called cosmic rays strike galactic gas or even starlight.

Cosmic rays are hyperfast electrons, positrons, and atomic nuclei moving at nearly the speed of light. But, although Earth is constantly bombarded by these particles, their origin remains a mystery nearly a century after their discovery. Astronomers suspect that the rapidly expanding shells of exploded stars somehow accelerate cosmic ray particles to their fantastic energy.

"For the first time, we're seeing diffuse emission from star-forming regions in galaxies other than our own," noted Jürgen Knödlseder, a Fermi collaborator at the Center for the Study of Space Radiation in Toulouse, France. He spoke to reporters today at the 2009 Fermi Symposium, a Washington gathering of hundreds of astrophysicists involved in the Fermi mission and related studies. The meeting continues through Nov. 5.

Knödlseder revealed an image captured by Fermi’s Large Area Telescope (LAT) of a star-forming region known as 30 Doradus within the Large Magellanic Cloud (LMC). Located 170,000 light-years away in the southern constellation Dorado, the LMC is the largest of several small satellite galaxies that orbit our own.

More stars form in the 30 Doradus “star factory” than in any similar location in the Milky Way. "The region is an intense source of gamma rays, and the diffuse emission we see with Fermi follows the glowing gas we see in visible light," Knödlseder explained.

The region lights up in gamma rays for the same reason the Milky Way does -- because cosmic rays strike gas clouds and starlight. But Fermi shows that the LMC's brightest diffuse emission remains close to 30 Doradus and doesn't extend across the galaxy. This implies that the stellar factory itself is the source of the cosmic rays producing the glow.

Fermi’s LAT sees diffuse emission from the starburst galaxies M82 and NGC 253, both of which were also seen this year by ground-based observatories sensitive to gamma rays hundreds of times more energetic than the LAT can detect. They do this by imaging faint flashes in the upper atmosphere caused by the absorption of gamma rays carrying trillions of times the energy of visible light.

"The core of M82 forms stars at a rate ten times greater than the entire Milky Way galaxy," said Niklas Karlsson, a postdoctoral fellow at Adler Planetarium in Chicago. He is also a member of the science team for VERITAS, an array of gamma-ray telescopes in Arizona that detected M82, which lies 12 million light-years away in the constellation Ursa Major.

"These very-high-energy gamma rays probe physical processes in other galaxies that will help us understand how and where cosmic rays become accelerated," Karlsson explained.

“Our sensitivity to gamma-rays -- both in space and on the ground -- has increased enormously thanks to Fermi and observatories like VERITAS," Digel said. "This is opening up the detailed study of high-energy processes in galaxies very close to home." NASA's Fermi Gamma Ray Space Telescope is an astrophysics and particle physics partnership, developed in collaboration with the U.S. Department of Energy, along with important contributions from academic institutions and partners in France, Germany, Italy, Japan, Sweden and the United States.