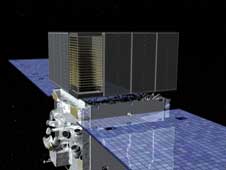 "Fermi's Large Area Telescope is a state-of-the-art gamma-ray detector, but it's also a terrific tool for investigating the high-energy electrons in cosmic rays," said Alexander Moiseev, who presented the findings. Moiseev is an astrophysicist at NASA's Goddard Space Flight Center in Greenbelt, Md.

Cosmic rays are hyperfast electrons, positrons, and atomic nuclei moving at nearly the speed of light. Astronomers believe that the highest-energy cosmic rays arise from exotic places within our galaxy, such as the wreckage of exploded stars.

Fermi's Large Area Telescope (LAT) is exquisitely sensitive to electrons and their antimatter counterparts, positrons. Looking at the energies of 4.5 million high-energy particles that struck the detector between Aug. 4, 2008, and Jan. 31, 2009, the LAT team found evidence that both supplements and refutes other recent findings.

Compared to the number of cosmic rays at lower energies, more particles striking the LAT had energies greater than 100 billion electron volts (100 GeV) than expected based on previous experiments and traditional models. (Visible light has energies between two and three electron volts.) The observation has implications similar to complementary measurements from a European satellite named PAMELA and from the ground-based High Energy Stereoscopic System (H.E.S.S.), an array of telescopes located in Namibia that sees flashes of light as cosmic rays strike the upper atmosphere.

Last fall, a balloon-borne experiment named ATIC captured evidence for a dramatic spike in the number of cosmic rays at energies around 500 GeV. "Fermi would have seen this sharp feature if it was really there, but it didn't." said Luca Latronico, a team member at the National Institute of Nuclear Physics (INFN) in Pisa, Italy. "With the LAT's superior resolution and more than 100 times the number of electrons collected by balloon-borne experiments, we are seeing these cosmic rays with unprecedented accuracy."

Unlike gamma rays, which travel from their sources in straight lines, cosmic rays wend their way around the galaxy. They can ricochet off of galactic gas atoms or become whipped up and redirected by magnetic fields. These events randomize the particle paths and make it difficult to tell where they originated. In fact, determining cosmic-ray sources is one of Fermi's key goals.

What's most exciting about the Fermi, PAMELA, and H.E.S.S. data is that they may imply the presence of a nearby object that's beaming cosmic rays our way. "If these particles were emitted far away, they’d have lost a lot of their energy by the time they reached us," explained Luca Baldini, another Fermi collaborator at INFN.

If a nearby source is sending electrons and positrons toward us, the likely culprit is a pulsar -- the crushed, fast-spinning leftover of an exploded star. A more exotic possibility is on the table, too. The particles could arise from the annihilation of hypothetical particles that make-up so-called dark matter. This mysterious substance neither produces nor impedes light and reveals itself only by its gravitational effects.

"Fermi's next step is to look for changes in the cosmic-ray electron flux in different parts of the sky," Latronico said. "If there is a nearby source, that search will help us unravel where to begin looking for it."