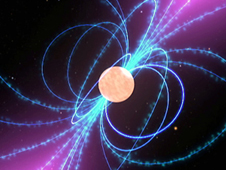 Clouds of charged particles move along the pulsar's magnetic field lines (blue) and create a lighthouse-like beam of gamma rays (purple) in this illustration.
Credit: NASA
> Larger image
WASHINGTON -- About three times a second, a 10,000-year-old stellar corpse sweeps a beam of gamma-rays toward Earth. Discovered by NASA's Fermi Gamma-ray Space Telescope, the object, called a pulsar, is the first one known that only "blinks" in gamma rays.

"This is the first example of a new class of pulsars that will give us fundamental insights into how these collapsed stars work," said Stanford University's Peter Michelson, principal investigator for Fermi's Large Area Telescope in Palo Alto, Calif.

The gamma-ray-only pulsar lies within a supernova remnant known as CTA 1, which is located about 4,600 light-years away in the constellation Cepheus. Its lighthouse-like beam sweeps Earth's way every 316.86 milliseconds. The pulsar, which formed about 10,000 years ago, emits 1,000 times the energy of our sun.

A pulsar is a rapidly spinning neutron star, the crushed core left behind when a massive sun explodes. Astronomers have cataloged nearly 1,800 pulsars. Although most were found through their pulses at radio wavelengths, some of these objects also beam energy in other forms, including visible light and X-rays. However, the source in CTA 1 only pulses at gamma-ray energies. 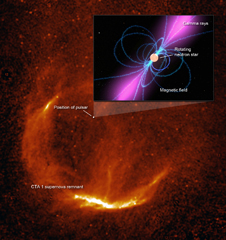 NASA's Fermi Gamma-ray Space Telescope discovered the first pulsar that beams only in gamma rays. The pulsar (illustrated, inset) lies in the CTA 1 supernova remnant in Cepheus.
Credit: NASA/S. Pineault, DRAO
> Larger image (labeled)
> Larger image of CTA map only (unlabeled)
"We think the region that emits the pulsed gamma rays is broader than that responsible for pulses of lower-energy radiation," explained team member Alice Harding at NASA's Goddard Space Flight Center in Greenbelt, Md. "The radio beam probably never swings toward Earth, so we never see it. But the wider gamma-ray beam does sweep our way."

Scientists think CTA 1 is only the first of a large population of similar objects.

"The Large Area Telescope provides us with a unique probe of the galaxy's pulsar population, revealing objects we would not otherwise even know exist," says Fermi project scientist Steve Ritz, also at Goddard.

The pulsar in CTA 1 is not located at the center of the remnant's expanding gaseous shell. Supernova explosions can be asymmetrical, often imparting a "kick" that sends the neutron star careening through space. Based on the remnant's age and the pulsar's distance from its center, astronomers believe the neutron star is moving at about a million miles per hour -- a typical speed.

Fermi's Large Area Telescope scans the entire sky every three hours and detects photons with energies ranging from 20 million to more than 300 billion times the energy of visible light. The instrument sees about one gamma ray every minute from CTA 1, enough for scientists to piece together the neutron star's pulsing behavior, its rotation period, and the rate at which it is slowing down. 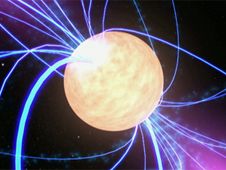 Fly around a model pulsar to see how astronomers believe the neutron star emits its gamma-ray beam (purple).
Credit: NASA Conceptual Image Lab
> Watch 512x288 animation
A pulsar's beams arise because neutron stars possess intense magnetic fields and rotate rapidly. Charged particles stream outward from the star's magnetic poles at nearly the speed of light to create the gamma-ray beams Fermi sees. Because the beams are powered by the neutron star's rotation, they gradually slow the pulsar's spin. In the case of CTA 1, the rotation period is increasing by about one second every 87,000 years.

"This observation shows the power of the Large Area Telescope," Michelson said. "It is so sensitive that we can now discover new types of objects just by observing their gamma-ray emissions."

NASA's Fermi Gamma-ray Space Telescope is an astrophysics and particle physics partnership, developed in collaboration with the U.S. Department of Energy, along with important contributions from academic institutions and partners in France, Germany, Italy, Japan, Sweden, and the U.S.

A paper about the new pulsar appears in the Oct. 16 edition of Science Express. For images and animations associated with this release, visit:
http://www.nasa.gov/mission_pages/GLAST/news/gr_pulsar.html Rob Gutro
Goddard Space Flight Center
› Back To Top