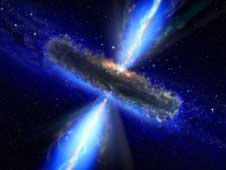 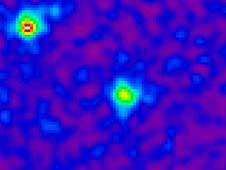 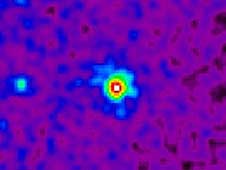 > View larger image
NASA's Fermi Gamma-ray Space Telescope sees NGC 1275 (center), the core member of the Perseus cluster of galaxies, as a source of high-energy gamma rays, but the earlier Compton mission did not. The beam from this galaxy's central black hole strengthened in the years between the two missions. Brighter colors indicate higher numbers of gamma rays at energies above 200 million electron volts. Credit: NASA/DOE/Fermi LAT Collaboration Back in June 1991, just before the launch of NASA's Compton Gamma-Ray Observatory, astronomers knew of gamma rays from exactly one galaxy beyond our own. To their surprise and delight, the satellite captured similar emissions from dozens of other galaxies. Now its successor, the Fermi Gamma-ray Space Telescope, is filling in the picture with new finds of its own.

"Compton showed us that two classes of active galaxies emitted gamma rays -- blazars and radio galaxies," said Luigi Foschini at Brera Observatory of the National Institute for Astrophysics in Merate, Italy. "With Fermi, we've found a third -- and opened a new window in the field."

Active galaxies are those with unusually bright centers that show evidence of particle acceleration to speeds approaching that of light itself. In 1943, astronomer Carl Seyfert described the first two types of active galaxy based on the width of spectral lines, a tell-tale sign of rapid gas motion in their cores. Today, astronomers recognize many additional classes, but they now believe these types represent the same essential phenomenon seen at different viewing angles.

At the center of each active galaxy sits a feeding black hole weighing upwards of a million times the sun's mass. Through processes not yet understood, some of the matter headed for the black hole blasts outward in fast, oppositely directed particle jets. For the most luminous active-galaxy classes -- blazars -- astronomers are looking right down the particle beam.

Using Fermi's Large Area Telescope (LAT), Foschini and his colleagues detected gamma rays from a Seyfert 1 galaxy cataloged as PMN J0948+0022, which lies 5.5 billion light-years away in the constellation Sextans. Splitting the light from this source into its component colors shows a spectrum with narrow lines, which indicates slower gas motions and argues against the presence of particle jet.

"But, unlike ninety percent of narrow-line Seyfert 1 galaxies, PMN J0948 also produces strong and variable radio emission," said Gino Tosti, who leads the Fermi LAT science group studying active galaxies at the University and National Institute of Nuclear Physics in Perugia, Italy. "This suggested the galaxy was indeed producing such a jet."

"The gamma rays seen by Fermi's LAT seal the deal," said team member Gabriele Ghisellini, a theorist at Brera Observatory. "They confirm the existence of particle acceleration near the speed of light in these types of galaxies." The findings will appear in the July 10 issue of The Astrophysical Journal.

"We are sifting through Fermi LAT data for gamma rays from more sources of this type," Foschini said. "And we've begun a multiwavelength campaign to monitor PMN J0948 across the spectrum, from radio to gamma rays."

Another case where Fermi sees something new involves NGC 1275, a massive Seyfert galaxy much closer to home. Also known as Perseus A, one of the sky's loudest radio sources, NGC 1275 lies at the center of the Perseus cluster of galaxies about 225 million light-years away.

The Compton observatory's high-energy EGRET instrument never detected gamma rays from NGC 1275, although it was detected by another instrument sensitive to lower-energy gamma rays. But Fermi's LAT clearly shows the galaxy to be a gamma-ray source at the higher energies for which EGRET was designed. "Fermi sees this galaxy shining with gamma rays at a flux about seven times higher than the upper limit of EGRET," said Jun Kataoka at Waseda University in Tokyo. "If NGC 1275 had been this bright when EGRET was operating, it would have been seen."

This change in the galaxy's output suggests that its particle beam was either inactive or much weaker a decade ago. Such changes clue astronomers into the size of the emitting region. "The gamma rays in NGC 1275 must arise from a source no more than two light-years across," said Teddy Cheung at NASA's Goddard Space Flight Center in Greenbelt, Md. "That means we're seeing radiation from the heart of the galaxy -- near its black hole -- as opposed to emission by hot gas throughout the cluster."

The Fermi team plans to monitor the galaxy to watch for further changes. The results of the study will appear in the July 1 issue of The Astrophysical Journal.