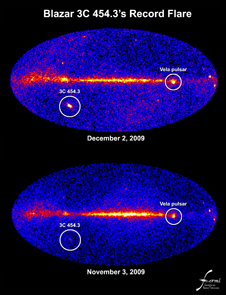 Unprecedented flares from the blazar 3C 454.3 in the constellation Pegasus now make it the brightest persistent gamma-ray source in the sky. That title usually goes to the Vela pulsar in our galaxy, which is millions of times closer. These all-sky images, which show the numbers of high-energy gamma-rays captured by Fermi's Large Area Telescope on December 3 and November 18, clearly show the change. Credit: NASA/DOE/Fermi LAT Collaboration
› Larger image
› Unlabeled image
› View video (6.2 MB mp4) A galaxy located billions of light-years away is commanding the attention of NASA's Fermi Gamma-ray Space Telescope and astronomers around the globe. Thanks to a series of flares that began September 15, the galaxy is now the brightest source in the gamma-ray sky -- more than ten times brighter than it was in the summer.

Astronomers identify the object as 3C 454.3, an active galaxy located 7.2 billion light-years away in the constellation Pegasus. But even among active galaxies, it's exceptional.

"We're looking right down the barrel of a particle jet powered by the galaxy's supermassive black hole," said Gino Tosti at the National Institute of Nuclear Physics in Perugia, Italy. "Some change within that jet -- we don't know what -- is likely responsible for these flares."

Blazars, like many active galaxies, emit oppositely directed jets of particles traveling near the speed of light when matter falls toward their central supermassive black holes. What makes a blazar so bright in gamma rays is its orientation: One of the jets happens to be aimed straight at us.

Most of the time, the brightest persistent source in the gamma-ray sky is the Vela pulsar, which at a distance of about 1,000 light-years lies practically next door.

"3C 454.3 is millions of times farther away, yet the current flare makes it twice as bright as Vela," said Lise Escande at the Center for Nuclear Studies in Gradignan, near Bordeaux, France. "That represents an incredible energy release, and one the source can't sustain for very long."

According to Massimo Villata at Italy's Torino Observatory, 3C 454.3 also is flaring at radio and visible wavelengths, if less dramatically. "In red light, the blazar brightened by more than two and a half times to magnitude 13.7, and it is also very bright at high radio frequencies."

The Fermi team is alerting astronomers to monitor the event over as broad a range of wavelengths as possible. "That's our best bet for understanding what's going on inside that jet," Tosti said.