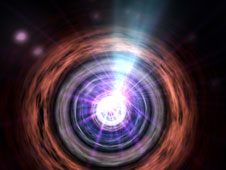 > Print resolution image
> Click to view animation
In the heart of an active galaxy, matter falling into a supermassive black hole somehow creates jets of particles traveling near the speed of light. For active galaxies classified as blazars, one of these jets beams right toward Earth. Credit: NASA/Goddard Space Flight Center Conceptual Image Lab An international team of astrophysicists using telescopes on the ground and in space have uncovered surprising changes in radiation emitted by an active galaxy. The picture that emerges from these first-ever simultaneous observations with optical, X-ray and new-generation gamma-ray telescopes is much more complex than scientists expected and challenges current theories of how the radiation is generated.

The galaxy in question is PKS 2155-304, a type of object known as a "blazar." Like many active galaxies, a blazar emits oppositely directed jets of particles traveling near the speed of light as matter falls into a central supermassive black hole; this process is not well understood. In the case of blazars, the galaxy is oriented such that we're looking right down the jet.

PKS 2155-304 is located 1.5 billion light-years away in the southern constellation of Piscis Austrinus and is usually a detectable but faint gamma-ray source. But when its jet undergoes a major outburst, as it did in 2006, the galaxy can become the brightest source in the sky at the highest gamma-ray energies scientists can detect -- up to 50 trillion times the energy of visible light. Even from strong sources, only about one gamma ray this energetic strikes a square yard at the top of Earth's atmosphere each month. 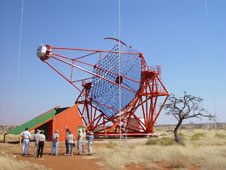 > Click to view larger image
The four identical telescopes of the High Energy Stereoscopic System in Namibia detect faint atmospheric flashes caused by the absorption of ultrahigh-energy gamma rays. Credit: H.E.S.S Atmospheric absorption of one of these gamma rays creates a short-lived shower of subatomic particles. As these fast-moving particles rush through the atmosphere, they produce a faint flash of blue light. The High Energy Stereoscopic System (H.E.S.S), an array of telescopes located in Namibia, captured these flashes from PKS 2155-304.

Gamma rays at lower energies were detected directly by the Large Area Telescope (LAT) aboard NASA's orbiting Fermi Gamma-ray Space Telescope. "The launch of Fermi gives us the opportunity to measure this powerful galaxy across as many wavelengths as possible for the first time," says Werner Hofmann, spokesperson for the H.E.S.S. team at the Max-Planck Institute for Nuclear Physics in Heidelberg, Germany.

With the gamma-ray regime fully covered, the team turned to NASA's Swift and Rossi X-ray Timing Explorer (RXTE) satellites to provide data on the galaxy's X-ray emissions. Rounding out the wavelength coverage was the H.E.S.S. Automatic Telescope for Optical Monitoring, which recorded the galaxy's activity in visible light.

Between August 25 and September 6, 2008, the telescopes monitored PKS 2155-304 in its quiet, non-flaring state. The results of the 12-day campaign are surprising. During flaring episodes of this and other blazars, the X- and gamma-ray emission rise and fall together. But it doesn't happen this way when PKS 2155-304 is in its quiet state -- and no one knows why.

What's even stranger is that the galaxy's visible light rises and falls with its gamma-ray emission. "It's like watching a blowtorch where the highest temperatures and the lowest temperatures change in step, but the middle temperatures do not," says Berrie Giebels, an astrophysicist at France's École Polytechnique who works with both the H.E.S.S. and Fermi LAT teams.

"Astronomers are learning that the various constituents of the jets in blazars interact in fairly complicated ways to produce the radiation that we observe," says Fermi team member Jim Chiang at Stanford University, Calif. "These observations may contain the first clues to help us untangle what's really going on deep in the heart of a blazar."

The findings have been submitted to The Astrophysical Journal.

The H.E.S.S. team includes scientists from Germany, France, the United Kingdom, Poland, the Czech Republic, Ireland, Armenia, South Africa and Namibia. The Fermi mission is an astrophysics and particle physics partnership, developed by NASA in collaboration with the U.S. Department of Energy, along with important contributions from academic institutions and partners in France, Germany, Italy, Japan, Sweden, and the United States.