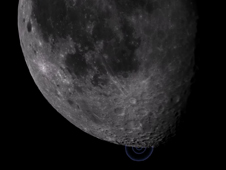 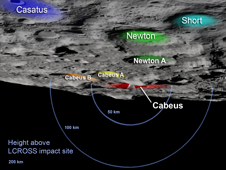 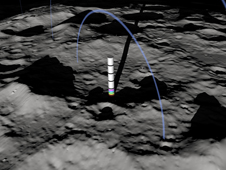 This visualization gives a bird's-eye view of Cabeus crater and the target zone for the crash site. A 3.5-kilometer-wide "flagpole" marks the targeted location within the crater. Colored stripes on the pole indicate one kilometer steps in elevation above the crater floor, black stripes indicate 5 kilometer steps. The pole stands 25 kilometers tall, and the blue rings mark heights of 50 and 100 kilometers above the impact site. Credit: NASA/Goddard Space Flight Center Scientific Visualization Studio
› Larger image (labeled)
› Larger image (unlabeled) At 7:30 a.m. EDT on October 9, a two-ton rocket body will slam into a crater near the moon's south pole. By studying the resulting plume of gas and dust, scientists hope this grand experiment will confirm the presence of ice in permanently shadowed craters at the lunar poles.

The event is the highlight of NASA's Lunar Crater Observation and Sensing Satellite (LCROSS) mission. The LCROSS spacecraft flies behind its empty upper stage, which is targeted to strike the floor of Cabeus crater. LCROSS will image the impact and provide direct measurements of the plume before it also plunges into the lunar surface. With LCROSS gone, further measurements of the cloud depend on ground-based observatories around the world.

"This is a completely unique mission that will excavate two large holes dozens of meters across on the lunar surface. It will give us composition measurements we wouldn't otherwise be able to get," said Tim McClanahan, a scientist at Goddard Space Flight Center in Greenbelt, Md.

McClanahan's modeling of the moon's permanently shadowed regions, initially done to support the Lunar Exploration Neutron Detector (LEND) instrument aboard NASA's Lunar Reconnaissance Orbiter (LRO), underscored a problem for ground-based follow-up of the LCROSS impact. "We realized that ground observers would have difficulty identifying the location," he said. "It's near the lunar south pole, where illumination is poor and the ability to distinguish nearly edge-on craters is problematic. On top of that, LCROSS will hit the crater floor, but we can only see its rim from Earth."

To provide the detailed information ground-based telescopes needed, McClanahan approached Goddard's Scientific Visualization Studio (SVS). The goal was to find a "sweet spot" where factors such as lunar topography, lighting from the sun, and the view from Earth provided the earliest, highest-contrast view of the rapidly changing plume.

"Visualization aided two aspects of the LCROSS mission," said Ernie Wright at the SVS. "It helped us understand how visible the plume will be from Earth and whether the targeted terrain was flat and in shadow."

The project prefers a crater floor because slopes tend to be rocky, whereas lighter, fluffier materials fall to the lowest elevations. "LCROSS scientists want to send up a debris cloud as high as they can," Wright explained, "so they want to hit these light materials."

Scientists think that hydrogen detected in lunar soil by several instruments, including LEND, may be either icy leftovers from ancient comet impacts or accumulated from the solar wind, a stream of particles flowing from the sun. Whatever its source, scientists assume hydrogen collects in low polar elevations where the sun never shines. This dictates an impact in the shadowed portion of a crater floor.

On September 11, LCROSS mission planners announced that they had targeted a smaller, more northerly crater named Cabeus A. But later that month, analyses of new data from instruments aboard LRO, together with archival measurements from NASA's Lunar Prospector mission of the late 1990s, indicated that the larger Cabeus crater was a better bet.

"The sweet spot for ground-based telescopes lies about two kilometers above the floor of Cabeus," Wright explained. "There, sunlight streaming through a depression in the crater rim will light up the plume while the rest of the crater remains in shadow."

NASA's Ames Research Center is responsible for managing the mission, conducting mission operations and has developed, integrated and tested the payload instruments. Ames mission scientists will conduct science missions operations from NASA-Ames in conjunction with a broad investigator community.