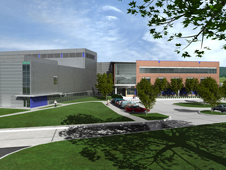 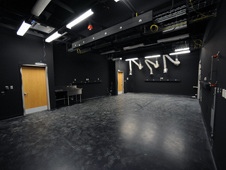 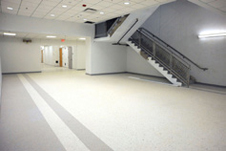 Collaboration area at the foot of the centralized staircase on the first floor. One of these collaboration areas in the center of the building appear on all three floors. Credit: Debbie McCallum NASA Goddard Space Flight Center in Greenbelt, Md. held a ribbon cutting ceremony on Monday, September 28 at 1 p.m. EDT for NASA employees to mark the opening of its newest building.

The ceremony to christen the three-story "Exploration Sciences Building" also known on campus as Building 34 was open only to NASA employees and featured brief remarks from the Goddard Center Director Rob Strain and Maryland House Majority Leader Steny Hoyer.

"Fifty years ago, leaders representing a newly formed space agency broke ground on the first building for a new space research center here in Greenbelt, Maryland, that would become the Goddard Space Flight Center," Strain said. "Today, we are officially opening a new Exploration and Sciences Building that will ensure NASA’s continued leadership at the forefront of scientific discovery for decades to come. Within these walls, scientists and technologists will ponder instruments and spacecraft to gather information that could answer some of the fundamental science questions of our age."

"The completion of the Exploration Sciences Building (ESB) is a major accomplishment for the overall development of the Goddard Facilities Master Plan," said David Larsen, ESB Project Manager at Goddard." This new phase of development allows for Code 600 employees (Earth and space science) to consolidate relocated operations in both Building 34 and the newly renovated Building 21.

One of the factors that contribute to the ESB's rating is its green roof. The roof is actually painted a brilliant white to reflect the sun’s heat. Having a "green" or environmentally friendly roof is a USGBC Leadership in Energy and Environmental Design (LEED) compliant feature and was one of the many features that helped the building achieve its "Gold" certification.

The building was also designed to foster collaboration among scientists, so "collaboration areas" are located in the building's center on each floor near a centralized staircase. The design concept was based on the idea of encouraging scientists to cross paths and engage one another towards the next new exciting discovery. There is also a "Conference Hallway" located on the first floor and an oversized "Symposium Room" capable of seating 200 persons.

A large skylight at the centralized staircase allows natural light to spill throughout the top two floors of the collaboration area. To assist with easy navigation throughout the building, each floor is uniquely color coded.

The laboratories have a number of special features. Lab floors are all made from epoxy flooring. Silicone or organic compounds are not used because of off-gassing. Off-gassing means that volatile chemicals in non-metal materials evaporate into the air at normal atmospheric pressure. Building materials can release chemical gases and odors into the air as they evaporate, and that process can last for years after the products are installed. Silicone couldn't be used in the laboratories either, because it gets into optics of satellites. Lab floors are grounded to prevent electrostatic discharge so static electricity doesn't disrupt electrical equipment.

Lab spaces can also be manipulated to create one, two or three separate areas, and even sectioned, each area will still have its own lab racks, lighting, and air ventilation. There are also several laboratories with black walls, floors, furniture and fixtures to prevent light reflectivity problems when scientists are developing and testing optics. While many of these rooms are using lasers, only some of the current laser use requires there to be black walls.

The USGBC is a 501(c)(3) non-profit community of leaders working to make green buildings available to everyone within a generation. The LEED Green Building Rating System is a voluntary, consensus-based national standard for developing high-performance, sustainable buildings.

The new building unifies Goddard's east and west campus. It was designed by EwingCole Architects, based in Philadelphia and Washington, and it was built by the Manhattan Construction Company of Fairfax, Va. The contract was awarded in April, 2007, so the building has come together in less than two and one-half years.

NASA's Goddard Space Flight Center is home to the nation's largest organization of combined scientists, engineers and technologists that build spacecraft, instruments and new technology to study the Earth, the sun, our solar system, and the universe.