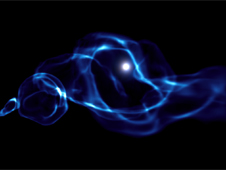 This frame from the simulation shows the X-rays produced by a black hole (white) and its effects on nearby gas (blue). This scene occurs 400 million years after the universe formed. The black hole, born from a star's collapse 200 million years ago, has grown by less than one percent -- about the mass of our sun -- since. Credit: KIPAC/SLAC/M. Alvarez, T. Abel and J. Wise
> Larger image 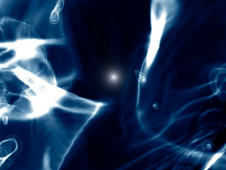 This movie of the simulation begins 208 million years after the universe formed and focuses on a star on the verge of collapse to a black hole (white, revealed by its X-rays). Gas clouds (blue) blown away by the star's intense light carve out a cavity that keeps the black hole from feeding. Credit: KIPAC/SLAC/M. Alvarez, T. Abel and J. Wise
> Watch movie A new supercomputer simulation designed to track the fate of the universe's first black holes finds that, counter to expectations, they couldn't efficiently gorge themselves on nearby gas. The findings have implications for understanding the formation of galaxies and of the giant black holes that reside in their centers.

"The first stars were much more massive than most stars we see today, upwards of 100 times the mass of our sun," said John Wise, a post-doctoral fellow at NASA's Goddard Space Flight Center in Greenbelt, Md., and one of the study's authors. "For the first time, we were able to simulate in detail what happens to the gas around those stars before and after they form black holes."

The intense radiation and strong outflows from these massive stars caused nearby gas to dissipate. "These stars essentially cleared out most of the gas in their vicinity," Wise said. A fraction of these first stars didn't end their lives in grand supernovae explosions. Instead, they collapsed directly into black holes.

But the black holes were born into a gas-depleted cavity and, with little gas to feed on, they grew very slowly. "During the 200 million years of our simulation, a 100 solar-mass black hole grew by less than one percent of its mass," said Marcelo Alvarez, the study's lead author, at the Kavli Institute for Particle Astrophysics and Cosmology, located at the Department of Energy’s SLAC National Accelerator Laboratory in Menlo Park, Calif.

This simulation, which was performed on a supercomputer at SLAC, is the most detailed to date. Starting with data taken from observations of the cosmic background radiation -- a flash of light that occurred 380,000 years after the big bang that presents the earliest view of cosmic structure -- the researchers applied the basic laws that govern the interaction of matter and allowed their model of the early universe to evolve. The complex simulation included hydrodynamics, chemical reactions, the absorption and emission of radiation, and star formation.

In the simulation, cosmic gas slowly coalesced under the force of gravity and eventually formed the first stars. These massive, hot stars burned bright for a short time, emitting so much energy in the form of starlight that they pushed away nearby gas clouds.

These stars could not sustain such a fiery existence for long, and they soon exhausted their internal fuel. One of the stars in the simulation collapsed under its own weight to form a black hole. With only wisps of gas nearby, the black hole was essentially "starved" of matter on which to grow.

Yet, despite its strict diet, the black hole had a dramatic effect on its surroundings. This was revealed through a key aspect of the simulation called radiative feedback, which accounted for the way X-rays emitted by the black hole affected distant gas.

Even on a diet, a black hole produces lots of X-rays. This radiation not only kept nearby gas from falling in, but it heated gas a hundred light-years away to several thousand degrees. Hot gas cannot come together to form new stars. "Even though the black holes aren't growing significantly, their radiation is intense enough to shut off star formation nearby for tens and maybe even hundreds of millions of years," said Alvarez.

The study, which will appear in an upcoming issue of The Astrophysical Journal Letters, shows that early black holes had a surprisingly complex role in shaping the universe.

"I'm thrilled that we now can do calculations that start to capture the most relevant physics, and we can show which ideas work and which don't," said coauthor Tom Abel, also at Kavli. "In the next decade, using calculations like this one, we will settle some of the most important issues related to the role of black holes in the universe."