NASA Predicts Non-Green Plants on Other Planets
NASA scientists believe they have found a way to predict the color of plants on planets in other solar systems.

Green, yellow or even red-dominant plants may live on extra-solar planets, according to scientists whose two scientific papers appear in the March issue of the journal, Astrobiology. The scientists studied light absorbed and reflected by organisms on Earth, and determined that if astronomers were to look at the light given off by planets circling distant stars, they might predict that some planets have mostly non-green plants. 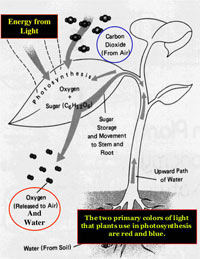 Image right: In the process of photosynthesis, plants convert energy from the sun into chemical energy in the form of glucose, or sugar. The chlorophyll in plants absorbs more blue and red light from sunlight, and less green light. Chlorophyll is green, because it reflects green light more than blue and red light. Click image to enlarge. Credit: NASA Ames

"We can identify the strongest candidate wavelengths of light for the dominant color of photosynthesis on another planet," said Nancy Kiang, lead author of the study and a biometeorologist at NASA's Goddard Institute for Space Studies, New York. Kiang worked with a team of scientists from the Virtual Planetary Laboratory (VPL) at the California Institute of Technology, Pasadena, Calif. VPL was formed as part of the NASA Astrobiology Institute (NAI), based at the NASA Ames Research Center in California’s Silicon Valley.

"This work broadens our understanding of how life may be detected on Earth-like planets around other stars, while simultaneously improving our understanding of life on Earth," said Carl Pilcher, director of the NAI at NASA Ames. "This approach -- studying Earth life to guide our search for life on other worlds -- is the essence of astrobiology." 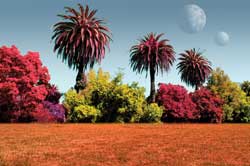 Image left: This is an illustration of what plants may look like on different planets. Click image to enlarge. Credit: Caltech illustration by Doug Cummings

Kiang and her colleagues calculated what the stellar light would look like at the surface of Earth-like planets whose atmospheric chemistry is consistent with the different types of stars they orbit. By looking at the changes in that light through different atmospheres, researchers identified colors that would be most favorable for photosynthesis on other planets. This new research narrows the range of colors that scientists would expect to see when photosynthesis is occurring on extrasolar planets. Each planet will have different dominant colors for photosynthesis, based on the planet’s atmosphere where the most light reaches the planet’s surface. The dominant photosynthesis might even be in the infrared.

"This work will help guide designs for future space telescopes that will study extrasolar planets, to see if they are habitable, and could have alien plants," said Victoria Meadows, an astronomer who heads the VPL. The VPL team is using a suite of computer models to simulate Earth-size planets and their light spectra as space telescopes would see them. The scientists' goal is to discover the likely range of habitable planets around other stars and to find out how these planets might appear to future planet-finding missions. 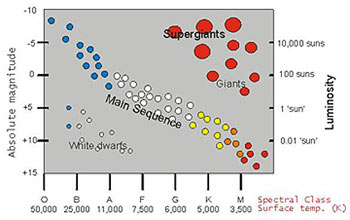 Image left: The Hertzsprung-Russell diagram developed by 2 astronomers in 1912, plots some of the characteristics of a large number of stars. They plotted spectral class vs. luminosity (brightness) of a large sample of stars. Our Sun's luminosity is 3.9 x 1026 Joules/s. The plot spans a large range in luminosity from a fraction of our Sun's brightness (0.01 times) to (10,000 times) much greater the strength of our Sun. Stellar surface temperatures range from 3,500 degrees Kelvin (K) (5,840 Fahrenheit (F)) to 50,000 K (89540 F). Our Sun is a G star. Credit: NASA

On Earth, Kiang and colleagues surveyed light absorbed and reflected by plants and some bacteria during photosynthesis, a process by which plants use energy from sunlight to produce sugar. Organisms that live in different light environments absorb the light colors that are most available. For example, there is a type of bacteria that inhabit murky waters where there is little visible light, and so they use infrared radiation during photosynthesis. 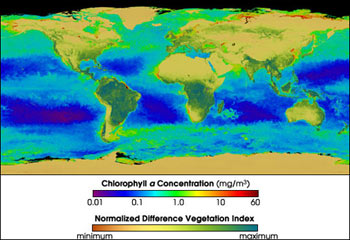 Scientists have long known that the chlorophyll in most plants on Earth absorbs blue and red light and less green light. Therefore, chlorophyll appears green. Although some green color is absorbed, it is less than the other colors. Previously, scientists thought plants are not efficient as they could be, because they do not use more green light.

According to scientists, the Sun has a specific distribution of colors of light, emitting more of some colors than others. Gases in Earth's air also filter sunlight, absorbing different colors. As a result, more red light particles reach Earth's surface than blue or green light particles, so plants use red light for photosynthesis. There is plenty of light for land plants, so they do not need to use extra green light. But not all stars have the same distribution of light colors as our Sun. Study scientists say they now realize that photosynthesis on extrasolar planets will not necessarily look the same as on Earth.

"It makes one appreciate how life on Earth is so intimately adapted to the special qualities of our home planet and Sun," said Kiang.

Image above: This graph shows the intensity of light by color (wavelength) that reaches the surface of Earth-like planets orbiting different types of stars. From hotter to cooler, the star types are F, G, K, and M. Our Sun is a G2 star (yellow line). A planet orbiting an F2 star (red line) has more blue light at the surface, whereas Earth and the K2 star planet receive more red light. Planets around M stars receive much less visible light but much more infrared light. Atmospheric gases such as ozone (O3), oxygen (O2), water vapor (H2O), and carbon dioxide (CO2) absorb light at specific wavelengths, producing the pronounced dips that astronomers might someday detect. Then in the diagram's horizontal axis, mark the wavelengths from 0 to 0.4 microns as UV, 0.4 to 0.7 as visible, and longer than 0.7 as infrared. Credit: NASA

NASA GISS is a leading center in the study of Earth’s past, present and future climates, research that is vital for understanding how life impacts and is impacted by the atmosphere on other planets. The NAI, founded in 1997, is a partnership between NASA, 12 major U.S. teams and six international consortia. NAI's goal is to promote, conduct and lead integrated multidisciplinary astrobiology research and to train a new generation of astrobiology researchers.