Grow Text SizeShrink Text Size
Leading from the Ground Up
Although NASA Glenn's first director, Dr. Edward R. Sharp, did not hold a technical degree, he charted the course of the center's early construction and testing. Along the way, his ability to lead and empower others earned him the respect and affection of those inside and outside of the agency. 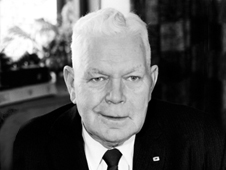 Dr. Edward R. Sharp. Credit: NASA
A native of Virginia, Sharp joined the National Advisory Committee for Aeronautics at Langley in 1922, after retiring from the Navy as lieutenant colonel. In a short time, while also earning a law degree, Sharp became second in command as chief administrative officer. He served in that position from 1925 to 1940.

He came to Cleveland in 1941 as the construction manager of the new Aircraft Engine Laboratory, which was changed to Lewis Research Center in 1958 and renamed Glenn Research Center at Lewis Field in 1999. Sharp served as the first manager when the laboratory began operation in 1942. He was named director in 1947 and remained at the helm until his retirement in 1960.

Sharp had an amiable and gracious style of management, and he created an atmosphere that encouraged cooperation among his staff. He frequently left his office to visit the shops and laboratories to talk with employees and thank them for their efforts. Sharp's wife, Vera, who died in 2000, was considered the center's unofficial hostess to many foreign dignitaries and renowned scientists.

Sharp's legal skills helped him negotiate contracts and run the day-to-day business activities, but he left the technical decisions to the engineers. In this role, he served as the catalyst for technological advancements by providing workers with the equipment, money and space they needed to perform their work. He instituted the center's first apprentice program, which produced outstanding mechanical, electronic and electrical support technicians. 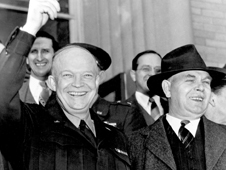 Sharp (right) and General Dwight D. Eisenhower on April 11, 1946. Eisenhower visited Lewis at the end of World War II to thank the research center for its role in developing military aircraft. Credit: NASA
Under Sharp's leadership, facilities such as the Flight Research Building (Hangar), Engine Research Building, Altitude Wind Tunnel, Icing Research Tunnel and Fluid and Lubricants Building were erected to achieve technological goals. Sharp's commitment to technological innovation earned him a reputation as an authority on aviation facilities and testing. Consequently, he received many technical honors through professional associations and universities. In 1947, he received the U.S. Medal of Merit, which was presented on behalf of President Truman. He sat on many boards and commissions for the city of Cleveland as well.

"The highly trained and highly motivated staff constitute the most significant contribution Ray has made to the business; they represent the most valuable legacy he leaves us," Manganiello said.

Another lesser-known Sharp legacy was a folder at the bottom drawer of his file cabinet titled "Orchid File." It contained positive notes and articles about the laboratory. On days when problems were pressing and he was feeling discouraged, he would reach for the file. After just moments of reading the file contents, he would begin chuckling to himself, his normal good spirits restored and his belief in NASA -- and its people -- renewed.