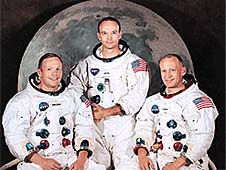 
Apollo 11 blasted off on July 16, 1969. Neil Armstrong, Edwin "Buzz" Aldrin and Michael Collins were the astronauts on Apollo 11. 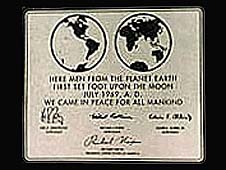 The sign the astronauts left on the moon says, "Here men from the planet Earth first set foot upon the moon July 1969, A.D. We came in peace for all mankind." Image Credit: NASA

On July 20, 1969, Neil Armstrong became the first human to step on the moon. He and Aldrin walked around for three hours. They did experiments. They picked up bits of moon dirt and rocks.


The two astronauts returned to orbit, joining Collins. On July 24, 1969, all three astronauts came back to Earth safely.


President Kennedy's wish came true. It took less than 10 years. Humans had walked on the moon.