Grow Text SizeShrink Text Size
Spiral Arms Point to Possible Planets in a Star's Dusty Disk
A new image of the disk of gas and dust around a sun-like star is the first to show spiral-arm-like structures. These features may provide clues to the presence of embedded but as-yet-unseen planets. 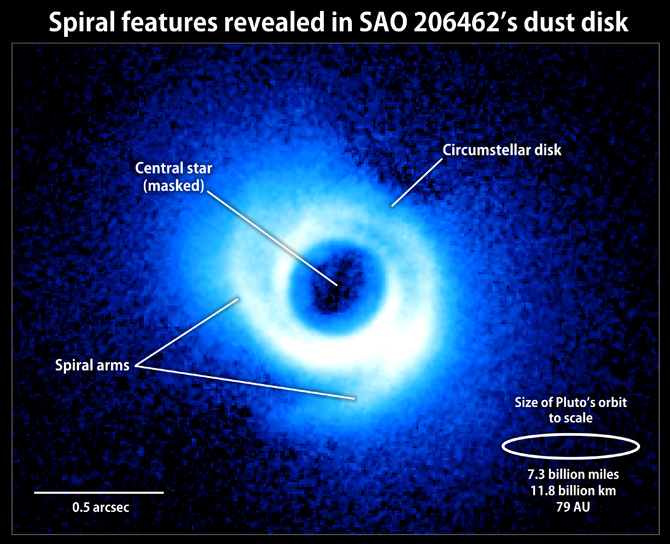 Two spiral arms emerge from the gas-rich disk around SAO 206462, a young star in the constellation Lupus. This image, acquired by the Subaru Telescope and its HiCIAO instrument, is the first to show spiral arms in a circumstellar disk. The disk itself is some 14 billion miles across, or about twice the size of Pluto's orbit in our own solar system. (Credit: NAOJ/Subaru)
› Larger image | Unlabeled version

"Detailed computer simulations have shown us that the gravitational pull of a planet inside a circumstellar disk can perturb gas and dust, creating spiral arms. Now, for the first time, we're seeing these dynamical features," said Carol Grady, an astronomer with Eureka Scientific, Inc., who is based at NASA's Goddard Space Flight Center in Greenbelt, Md. She revealed the image today at the Signposts of Planets meeting hosted this week at the center.


Grady's research is part of the Strategic Exploration of Exoplanets and Disks with Subaru (SEEDS), a five-year-long near-infrared study of young stars and their surrounding dust disks using the Subaru Telescope atop Mauna Kea in Hawaii. The international consortium of researchers now includes more than 100 scientists at 25 institutions.

"What we're finding is that once these systems reach ages of a few million years, their disks begin to show a wealth of structure -- rings, divots, gaps and now spiral features," said John Wisniewski, a collaborator at the University of Washington in Seattle. "Many of these structures could be caused by planets within the disks."

The newly imaged disk surrounds SAO 206462, an 8.7-magnitude star located about 456 light-years away in the constellation Lupus. Astronomers estimate that the system is only about 9 million years old. The gas-rich disk spans some 14 billion miles, which is more than twice the size of Pluto's orbit in our own solar system.

The Subaru near-infrared image reveals a pair of spiral features arcing along the outer disk. Theoretical models show that a single embedded planet may produce a spiral arm on each side of a disk. The structures around SAO 206462 do not form a matched pair, suggesting the presence of two unseen worlds, one for each arm.

However, the research team cautions that processes unrelated to planets may give rise to these structures.

The view was made possible by the High Contrast Instrument for the Subaru Next Generation Adaptive Optics, or HiCIAO (pronounced "HI-chow"), which is designed to block out harsh direct starlight.

"Together with improvements to Subaru's adaptive optics system, which counteracts the blurring effects of Earth's atmosphere, the telescope is operating near its theoretical performance limits," said SEEDS principle investigator Motohide Tamura at National Astronomical Observatory of Japan, which operates the telescope. "We are just beginning to see what it will do."

"The Signposts of Planets meeting is all about understanding these kinds of patterns,” said NASA Goddard’s Marc Kuchner, who organized the conference. “It’s a new kind of planet-hunting technique that is just now coming to fruition, and this new image from SEEDS is the perfect example of how it can work." Francis Reddy
NASA's Goddard Space Flight Center, Greenbelt, Md.
› Back To Top