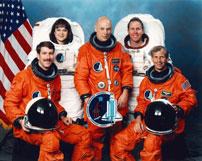 Final shuttle flight of 1996 was highlighted by the successful deployment, operation and retrieval of two free-flying research spacecraft. The two planned extravehicular activities (EVAs) were canceled.

All ORFEUS-SPAS II mission goals were achieved and there were no significant problems with either instruments or support hardware. Some 422 observations of almost 150 astronomical objects were completed, including the moon, nearby stars, distant Milky Way stars, stars in other galaxies, active galaxies and quasar 3C273. In comparison to the first ORFEUS-SPAS mission in 1993, the ORFEUS-SPAS II instruments were more sensitive and yielded higher-quality data. In addition, more than twice the data was obtained than on the first ORFEUS-SPAS flight.

Two planned six-hour EVAs by Jernigan and Jones were designed to evaluate equipment and procedures that will be used during construction and maintenance of the International Space Station. However, crew could not open outer airlock hatch and when troubleshooting did not reveal cause, mission managers concluded it would not be prudent to attempt the two EVAs and risk unnecessary damage to hatch or seals. Crew was able to evaluate new Pistol Grip Tool, similar to handheld drill, in middeck. Post-landing assessment of hatch indicated a small screw had become loose from an internal assembly and lodged in an actuator -- a gearbox-type mechanism that operates linkages that secure the hatch -- preventing crew from opening hatch. Hatch opened easily when replacement actuator installed. Analysis was under way to determine what additional checks needed to be made on hatches to preclude recurrence of problem.