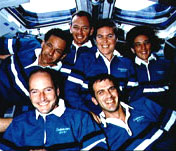 The launch originally targeted for mid-May was rescheduled to June to allow both liftoff and landing to occur in daylight. Liftoff was reset for June 3 but slipped when managers decided to replace the high pressure oxidizer turbopump on main engine number two, after concerns arose over misplaced inspection stamp (penetration verification stamp) on spring in pump. Additional time also allowed for an investigation of an inexplicable loud noise heard after the shuttle arrived at the launch pad; "big bang" was eventually attributed to a ball strut tie-rod assembly inside 17-inch (43- centimeter) liquid hydrogen line. The launch attempt on June 20 was scrubbed at T-5 minutes due to low clouds and rain at the return-to-launch site at KSC, and weather concerns at all three transoceanic abort landing sites. Launch countdown was the longest since return to flight to allow for servicing of payloads at pad.

On June 24 at 12:36 p.m. EDT, the crew captured and stowed the approximately 9,424-pound (4,275-kilogram) European Retrievable Carrier (EURECA) deployed on Mission STS-46. However, EURECA ground controllers were unable to stow the spacecraft's two antennas, and on June 25, Low and Wisoff spent the beginning of the scheduled extravehicular activity (EVA) manually folding the antennas. The remainder of the 5-hour, 50-minute EVA was spent on planned tasks; this was the second in a series of generic EVAs this year.

On June 22, all six crew members talked with President Clinton.

Other cargo bay payloads: Get Away Special (GAS) bridge assembly holding one ballast can and 11 GAS can payloads, including Complex Autonomous Payload called Consortium for Materials Development in Space-IV (CONCAP-IV) and CAN DO experiment designed by Charleston, South Carolina school district; also Super Fluid Helium On Orbit Transfer (SHOOT) experiment to investigate resupply of liquid helium containers in space.