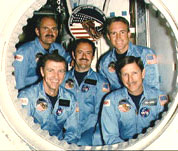 The launch scheduled for August 24 was scrubbed at T-5 minutes due to thunderstorms in the vicinity. The launch scheduled for August 25 was delayed when the orbiter's number five on-board general purpose computer failed. The launch on August 27 was delayed three minutes, one second due to a combination of weather and an unauthorized ship entering the restricted solid rocket booster recovery area.

The mission shortened one day when the AUSSAT sunshield hung up on remote manipulator system camera and AUSSAT had to be deployed before scheduled.